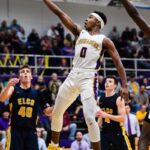 Quotables: Seth Sigman, Head Coach for Cocalico. “We are getting a couple of guys back from illnesses, so that will be a positive for us. We played very well on Friday night, but we know things only get more difficult from here on out. We have to do a good job of guarding inside on Monday night if we want to win. Cedar Crest is a very very good team. Tom has done a great job again this year with his team. They are definitely built to compete for league and district titles. We have a lot of respect for their program and the success they have had over the last decade. They have two really good big guys inside, and they have guards that can handle and shoot. That’s a pretty good start to having a really good team. For us to win we have to get defensive rebounds and limit their second chance opportunities. Making some 3’s will always be a key factor for us as well. When we’re making shots we can be very dangerous.”

Dell’s thoughts…We’ve seen both teams several times this season. How about the 3’s being about equal ? :)…Cocalico has a game under its belt in the LL with a 55-43 W over Lancaster Mennonite in the first round of the LL. …The Eagles shot the ball extremely well. They were led by LLhoops Player of the Game – Carter Nuneville. The Eagles have some physical players inside (Augie Gerhart -6’5″, Trey Griffin-6’4″, Carson Nash- 6’3″) to match the Falcons…. The Falcons feature an inside game second to none in the LL. The hi-light video clip big, Ileri Ayo-Faleye, and inside posting of Jason Eberhart gives the Falcons a big advantage inside. …The Eagles will need to pop some threes to counter Crest’s inside advantage. Neither team is a ‘get em up and down’ type. Crest’s fan base is one of the best in the LL. 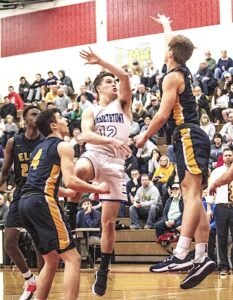 Dell’s thoughts….How about the first round match-up between these teams in the District 3 tournament? At least it will save on some scouting time J…Etown features a very balanced team. The Bears have a lot of players who are similar- athletic and rebounding machines. They are led by senior point guard, Ryan Parise and a top notch scorer in Elijah Eberly…LS, as they have in the past, uses the three- ball like no other team in the LL. Seth Beers is outstanding- he sets players up, can get to the rack and pops three balls as well. This game will be decided by offensive efficiency (If LS is hot from the three-line…or if Etown can control the glass and use its athletism to its advantage).

Quotable..Rocky Parise, Etown “Every game is going to be a battle this time of the year. We learned that last year and will take that experience to help us in this postseason. Every team that is left can win this tournament. So it’s one game at a time and see what happens. I couldn’t be more proud of our program and team that we have put ourselves in these playoff spots.” 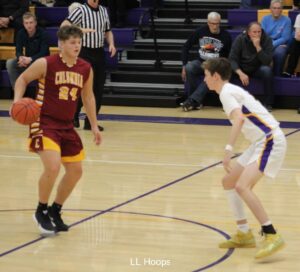 Dell’s thoughts…Columbia is the only LL team to win their section with no losses. Coach Glover has a very balanced team. The Tide plays hard and will use a variety of defenses within a game. Kerry Glover guides the team from his point position. The Tide is not deep but the players on the floor can all score. The Tide loves to run…Warwick absorbed a major hit when top scoring guard, Joey McCracken, went down with a leg injury late in the season. However, this group is still very talented. With most of the players back from last years LL runner-up team, they have the experience and talent to make another run at the LL’s. Warwick will penetrate and kick for threes (6 players have double digit threes- led by Soph. Tate Landis with 25) as well as get some easy baskets off of mistakes by the opponent. The key for this game will be the boards. Prediction is that the winner of the ‘battle of the boards’ will be the winner of the game.

Quotable..Coach Glover, Columbia  “Our mentality is focus on what we can control and don’t stress the rest. No one is giving us a shot, so it’s about coming in and earning some respect. Realizing that we can still get better each moment we’re on the court.” 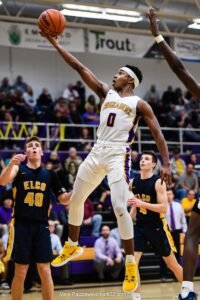 Dell’s thoughts…the last time these 2 perennial playoff teams met in the LL’s was 2012 with McCaskey winning a title..McCaskey has qualified for the LL’s 30 times, and LCHS has been there 23 times – kind of the blue-bloods of the LL…McCaskey has the highest offensive average of all the teams still in the playoffs…The last time McCaskey played, they defeated CD East (helped TWP big-time) in a double OT classic – 100-99. Elijah Terry rang to bell for a 40 plus game, and the Tornado needed every one of his and others points…the Tornado is rather smallish for a 6A team, but everyone chips in with defensive boards. ..Catholic, however, does have inside strength, with David Kamwanga (6’7”), Tery Wells (6’5”) and Devin Atkinson (6’2”). Coach Joe Klazas earned victory number 300 earlier in the year. He has been to many LL playoffs…. Coach Freddy Ramos (background with LCHS) is entering his first LL tournament as the 2nd year boss of McCaskey…with the game being at a sold-out Lancaster Catholic gym, the home-court advantage could play large. Keys to the game: 1) Can McCaskey get out and run?   2) Can LCHS use its inside game to its advantage 3) which team can withstand the inevitable run?