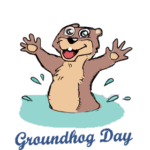 The week that was:

Dell Jackson of https://t.co/qeI4PX9jX6 joins Mike Gross and me on the latest edition of After the Buzzer https://t.co/EfgQoC8rNk

From Fox 43 Alex Cawley–hard to argue 🙂

If @LLhoops shows up to your game, it's guaranteed you're in for a good one.

Looking ahead…
Some non-league games on Monday, Wed, and Thursday. LL wraps up on Tuesday. The key game this week is ELCO at Lancaster Catholic. If Catholic wins, they will win the Section 4 Title. If ELCO wins, they would force a 1 game playoff for the Section title- loser plays in the play-in game on Friday.

The LL’s start this week as well. Section 3-2 (Cocalico) will play Section 5-2 (Lancaster Mennonite) and Section 2-2 (Etown) will play Section 4-2 (either Lancaster Catholic or ELCO) on Friday. The games will be played at Warwick- tip times 5:30 and 7:30, with the Etown game first.

LLhoops should be covering the Etown game via AUDIO only. This depends on getting to the game on time 🙂 More information will follow on the site later in the week.

Districts 3
Here is the link to the District 3 Boy’s power rankings. Things change rather quickly so we will address teams IN the districts next week.

LLhoops Shop …is back. We re-stocked our classic logo, plus we have some 20th anniversary shirts for sale. Check out our shop. We are working on an LL tournament tshirt for both girls and boys—more on that next week.

LLhoops Livestream
Our regular season is over. We concluded with a classic game between McCaskey /Crest. All our past games can be found on our youtube channel. Lots of folks to thank in this space: Eric Thomas, Warren Goodling, Bruce Badgley, Luis Galen, Jim Kreider, Chris Sherwood, Andy Herr and all schools – AD’s, IT, and staff- that allowed us to broadcast their games. Our “Player of the Game” interviews were a big hit. Recently, we tried some trivia and that went over well. 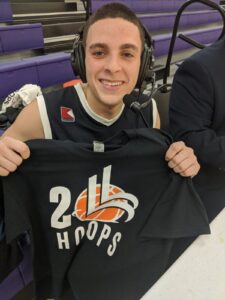 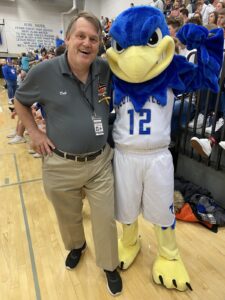 This week will be the last week to help sponsor the LL finals. Our last game garnered over 1000 views. Contact us if interested. Basically, we are covering our costs:  LL fees, production costs, and equipment. Finally, we could not put on the shows without our sponsors. This is our second year of live-streaming. Hoping to get year 3 in as well ☺

LL playoffs
We will be out and about covering games in the next 2 weeks. Check under the LL playoff tab for current updates. This is a new feature, so we will be tweaking it as we go. As of now, we are planning on doing an audio only for the first round game, and perhaps one more. On Feb 13th and 14th we will be anchored at TWP for live-stream broadcasts of the girls and boys. Bruce Badgley and Jim Kreider will be behind the mic. The boy’s game will have the dynamic duo of Warren Goodling and Eric Thomas calling the game.

For all our coverage, click on the LL Playoffs tab, then playoff home. All our posts, and information will be there and also on the home page.

Jim Kreider- ex head  boys coach at AC, Cocalico and jn hi girls at Cocalico gives us some current info on the upcoming girls tournament:
“The 2020 L-L League Girls Hoops Playoffs will kick-off on Thursday, February 6th with Play-in games, followed by Quarterfinals on Saturday, February 8th, Semis on Tuesday, February 11th and the Finals on Thursday, February 13th at Manheim Township at 7 p.m. It’s been another great season on the girls’ side with a lot of parity which should lead to some outstanding playoff games!

Hempfield, Lancaster Catholic and Lancaster Country Day have survived league play unscathed thus-far, with games remaining on Tuesday. Ephrata and Solanco round out the list of section winners! Through the early round games to the finals expect to see some great team and individual play as some of the best experienced and newcomer players will certainly shine.”

As always, between Andy and Dell, we will have varying degrees of coverage – tweets, game wraps, picts, and videos. Lee Vivian will provide some picts…we might have Mark22 as well for the finals- might.

The tournament should provide us with some great moments. Several teams have established themselves as legit contenders for the LL crown.

The LL archive will be hit several times in the next week!

We tried to put together where the boys games have been played. We think this is a pretty close list—if there are corrections to be made, please contact us.

Kobe…
Here are some tid-bits off our twitter followers.

Paul Blackburn, Hershey HS Head coach
“My wife Tara and I snuck in the back loading door at Hershey Park Arena with my then, 7 month old daughter Victoria in a baby seat to see Kobe in 1996 state title game. We sat front row on the baseline under the basket, Victoria in her baby seat on the floor. Kobe fell near Victoria during play and we jumped up to protect Victoria, he almost fell right in her lap. No one was hurt, thank God, but Tara and I have always told Victoria she met Kobe at an early age

. Kobe was spectacular in that game, mesmerizing to watch. Tara and I went in the summer to watch Kobe play in the Keystone State games at Susquehanna Twp HS against Rip Hamilton. That gym was sweltering hot that day. Kobe and Rip put on a show…seemed they both had over 40 points each. Dunks, pull-up jumpers, creative finishes at the rim, passes, blocks…it was one of the best games I have ever seen to this day. Rest In Peace Kobe…very sad day today.”

From the Middle Atlantic Sporting News, Editor Jerry Shenk (Jerry also did rankings for LLhoops for 10 plus years)
Picts via Dave Burman (@BurmanDave). Check out the top players that year- some familiar names, and a wrap of Kobe stats for the year at Lower Merion. 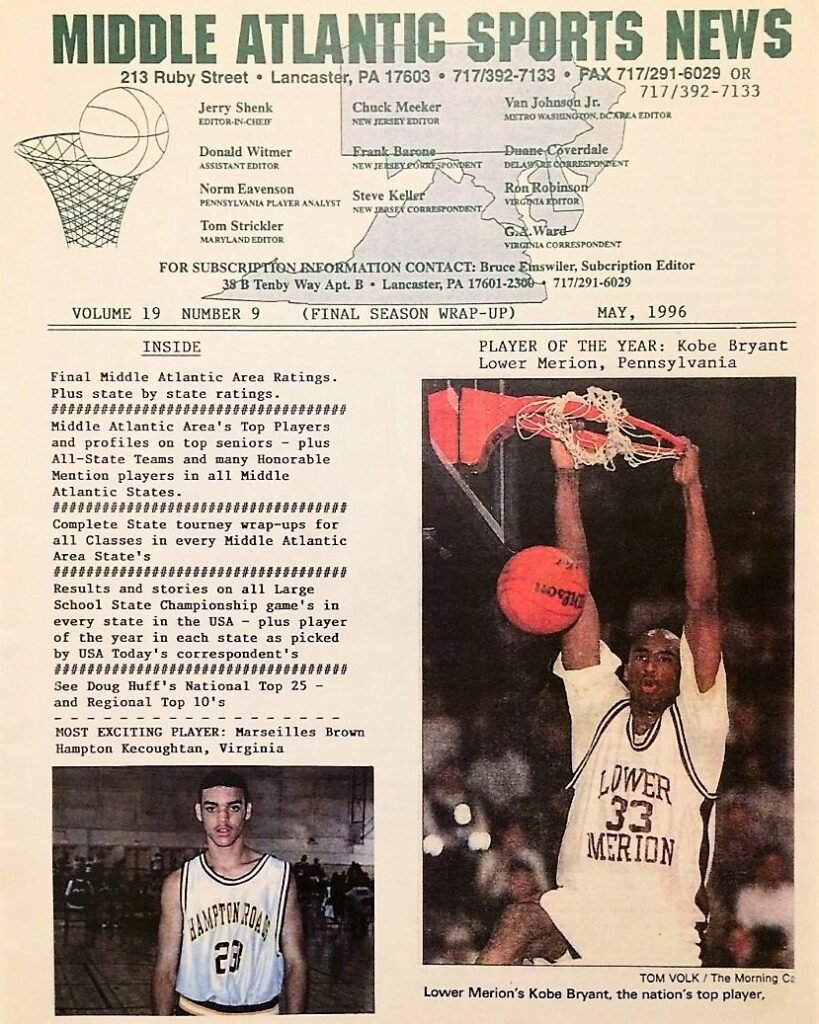 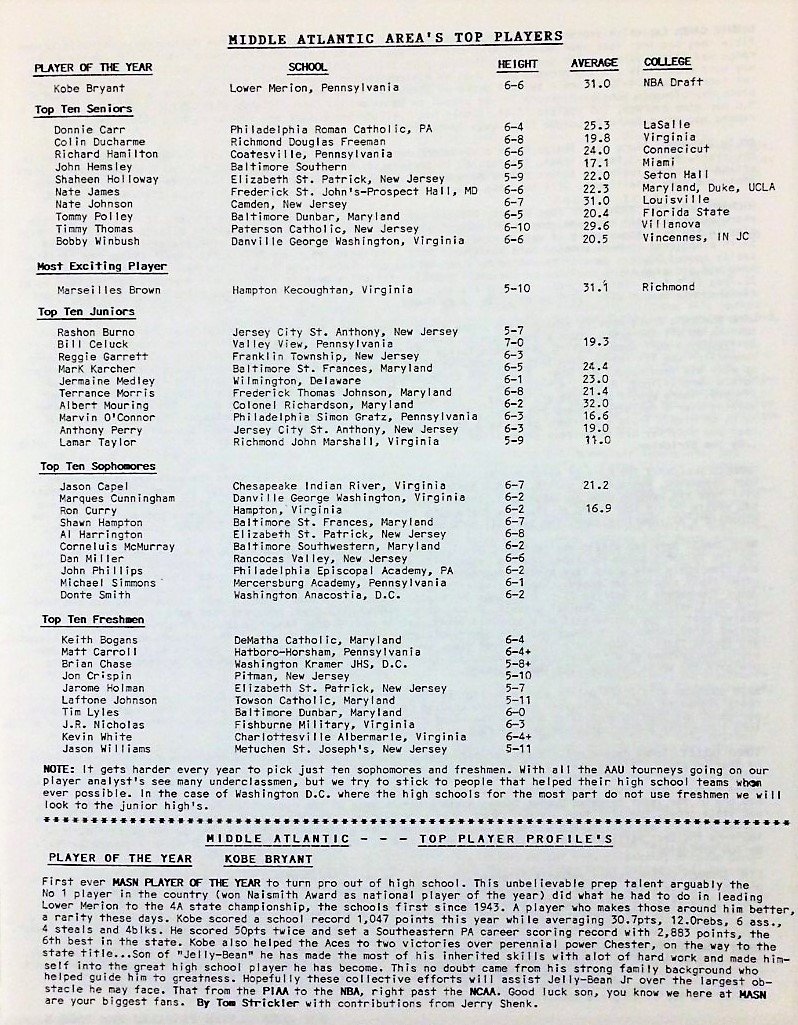 Signed PIAA scorebook, unofficial book—via Dave Burman.
Dave shared with us that he worked that game for himself- he was working in Va for a radio station at the time. Contacted PIAA for credentials and walked back into the locker room after the game for the signature. Check the top of the book:) 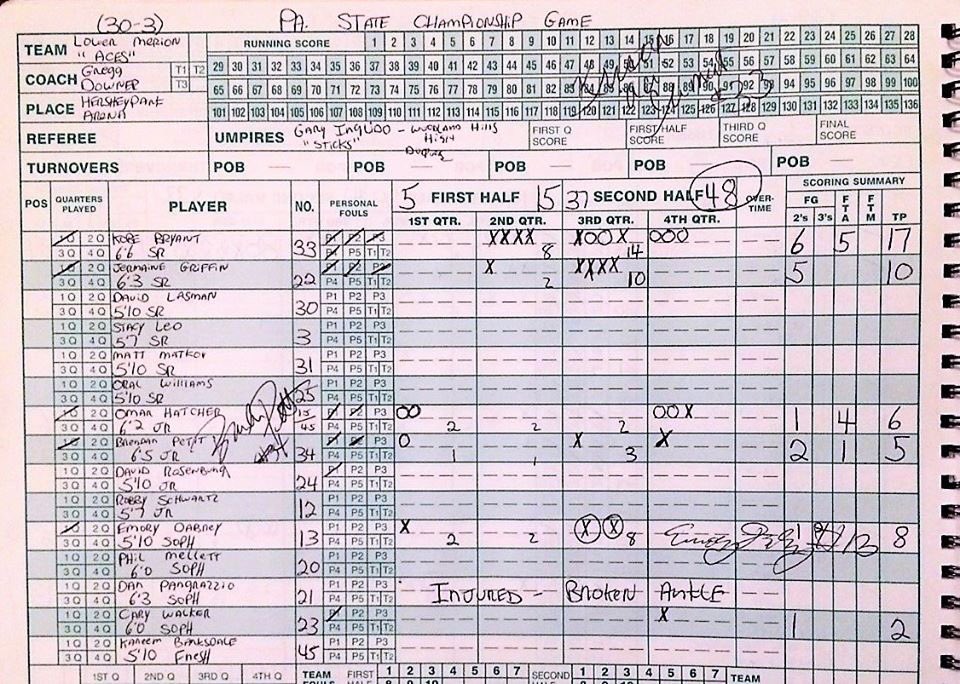 Jeff Reinhart, LNP did an article on Kobe when he was first starting out as a sports reporter:

One last time for this one … My 1996 story about Kobe Bryant during his Lower Merion days. I was a young-buck reporter guy just kinda finding my way. Will never forget this. https://t.co/OSWWcKHkf4

In 1996, I was assigned by SportsFever magazine to cover the basketball state finals in Hershey. I was told there was a prodigy named Kobe Bryant playing for Lower Merion and to get pictures of him. These have been hanging in my basement for 20 years. pic.twitter.com/3p6r936Ex6

Gordie Jones’ article on how the 76ers celebrated Kobe

Duke recognition…I was at the Duke game vs Pitt,. The teams had practice tops with an “8” on the front and “24” on the back. At the start of the game there was a silent time of 24.8 on the clock. Coach K wore the top during the game as well. 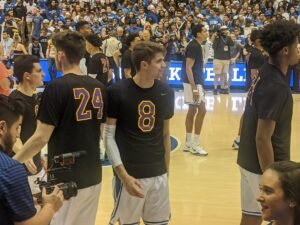 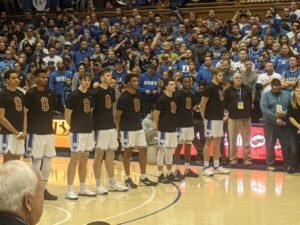 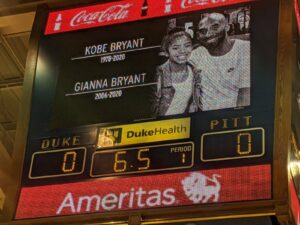 LLhoops crew got in the act as well as our guys wore gold/purple ribbons on the Crest broadcast. 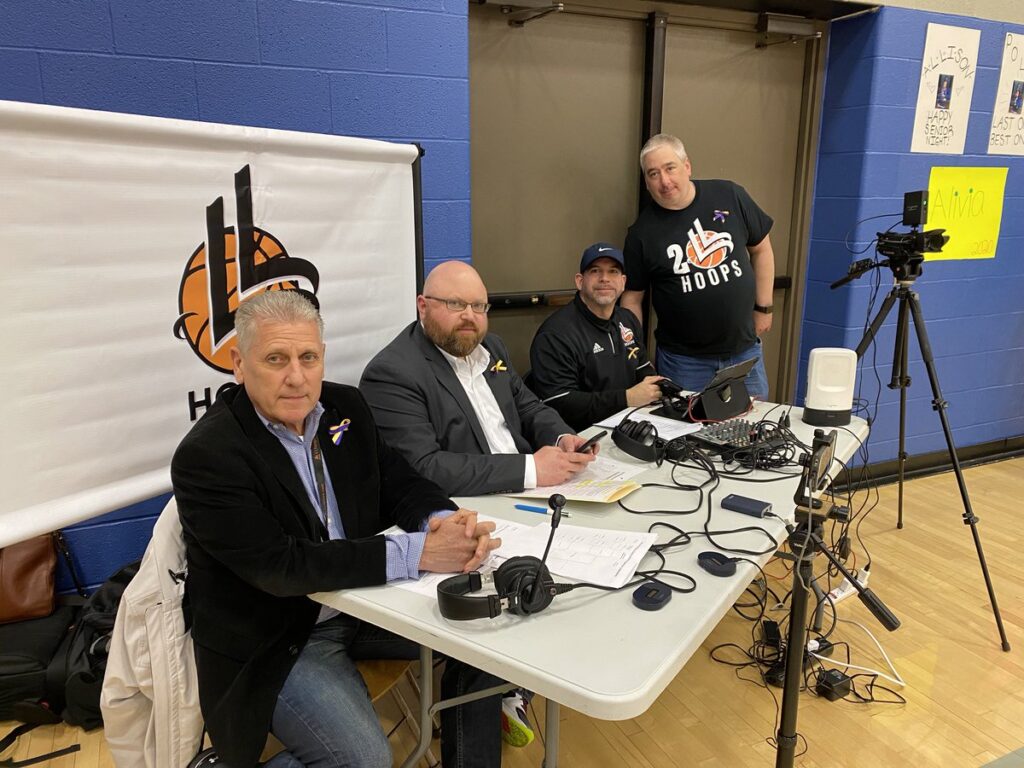 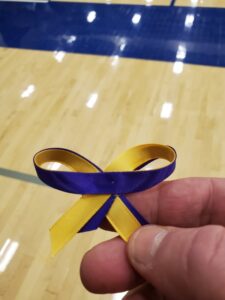 …and of course the McCaskey Cheerleaders took things to a different level: 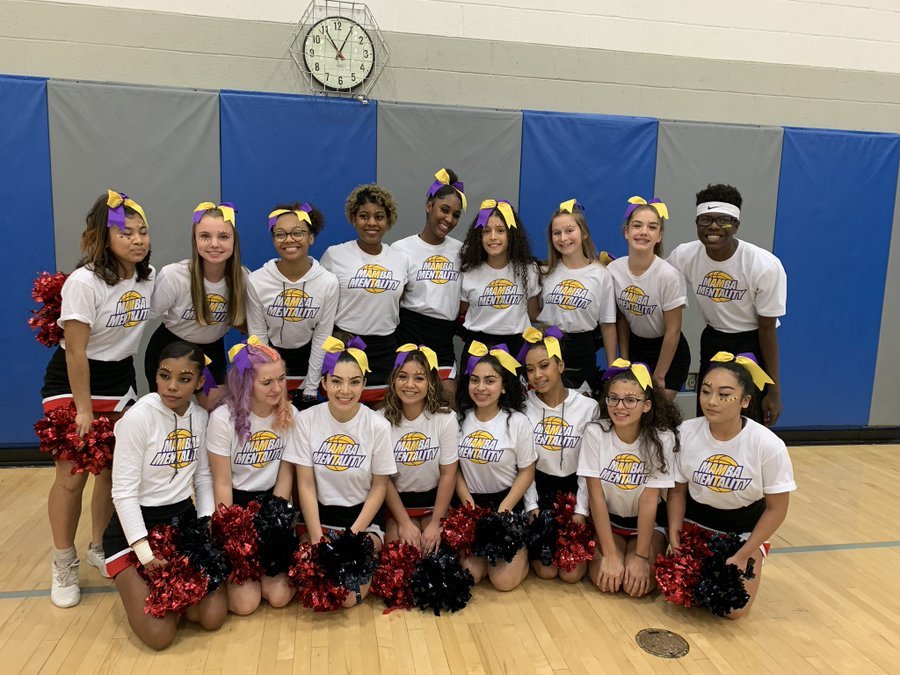 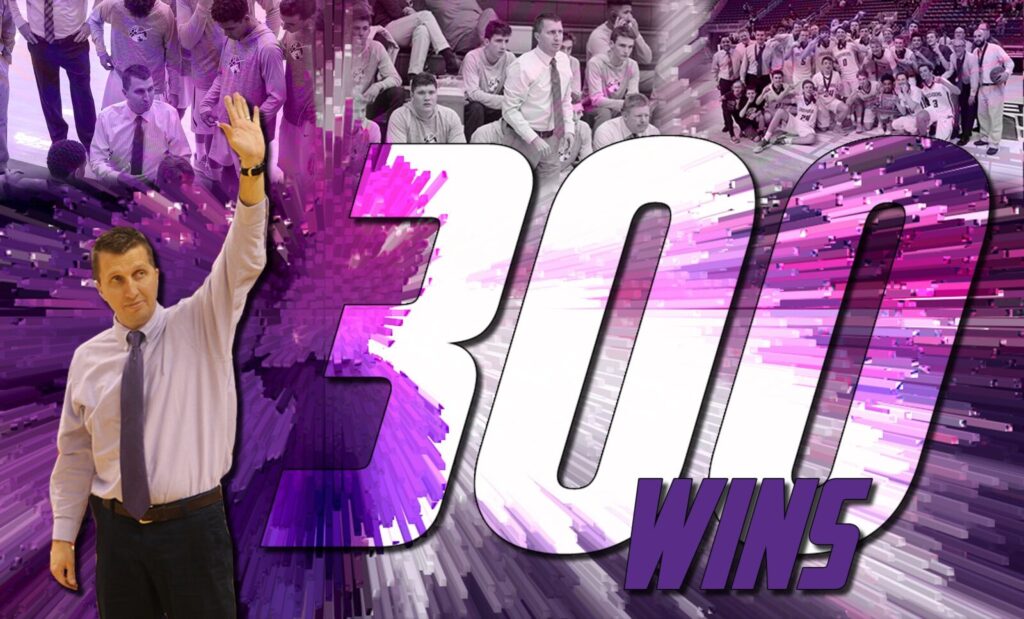 Section winners—Congrats to Crest, Warwick, LS, Columbia.
Section 4 is still up in the air as of Feb 2, 2020. Both Lancaster Catholic and ELCO will be in the LL. 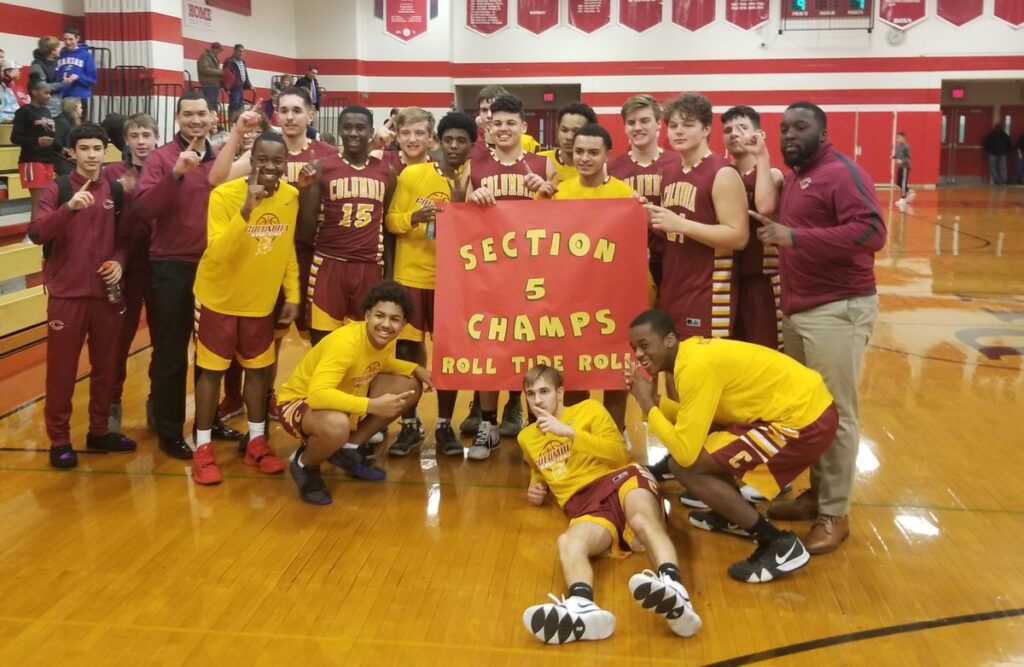 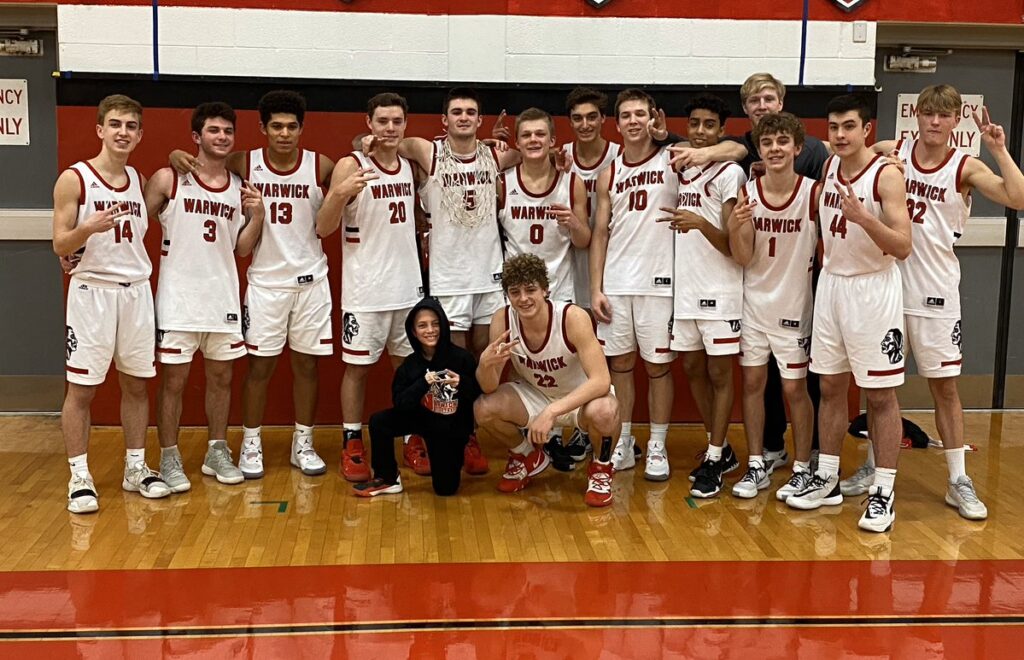 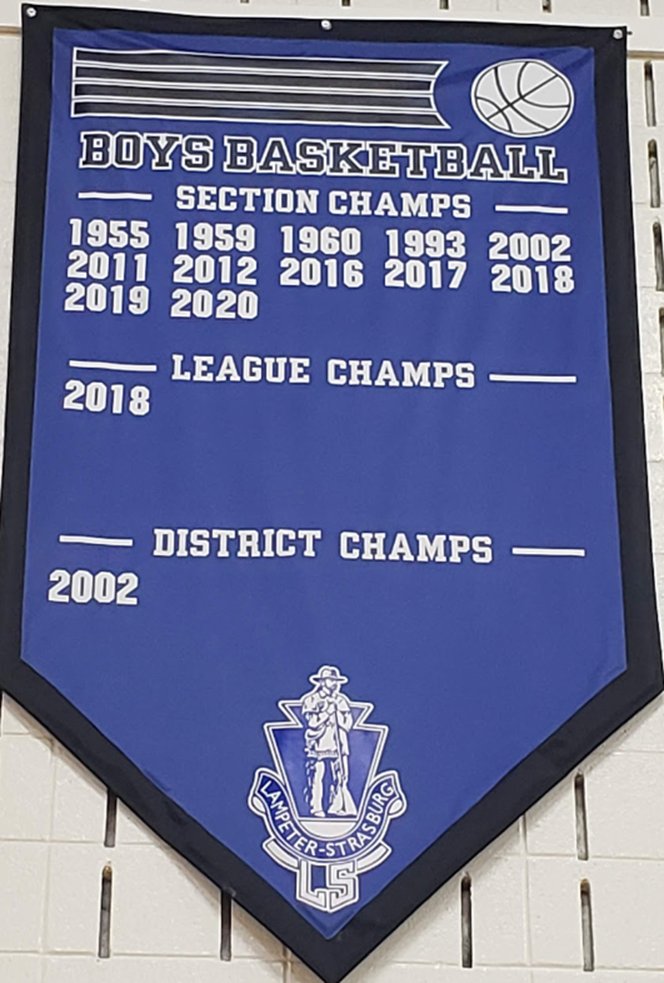 5 in a row! Pict from LSbasketball

Congrats to all players playing in their last games this week. Coach  Warren Goodling shared with me that we are all entwined in many ways as basketball connects us now and in the future.

Big week and a bigger one next week.