The week that was….

Andy and Dell were out and about as usual.

With most sections settling into stats quo, there were few surprises last week.

And last but not least…a trip to Durham 🙂 Mark22 photos was provided courtside credentials and, as always, took some great shots of the game. Although they are not for sale, you can check out his picts on his webiste. 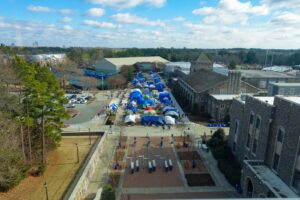 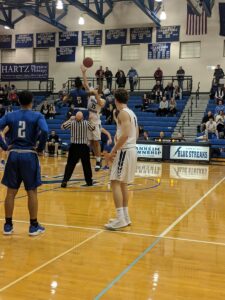 Section 2
The Warwick Warriors defeated Penn Manor 41-38 in Millersville last Friday. With the W, the Warriors completed a sweep of the Section 1 teams- a feat that is very impressive. Warwick does not have the wow factor, the top scorer, or a lot of height. What they do have is a team that moves the ball, pops key threes, and a bunch (mostly) that have been together for some tough years. Warwick (9-0) has a 3 game lead over second place Etown (5-3). Warwick has clinched a playoff berth but not the section crown.

Section 3
LS is on cruise control. Second place Spot took on the Pioneers this week, and LS swatted the Spartans away with a convincing 66-47 W. Also the Pioneers beat Cocalico (currently third in Section 3) 50-31 on the road. Spot is 5-3 and Cocalico is nipping at their heals with a 5-4 record. Spot plays @ Cocalico this Thursday in a very key game for both teams.

Section 4
Crusaaaaders….are rolling. Lancaster Catholic is 7-1 with a 2 game lead over ELCO. ELCO gave LCHS all it could handle on Friday with LCHS coming out with a 42-40 win at home. LCHS continues to schedule tough non-league games, losing to Berks Cath. This past Sat 60-43 on the road. Octorara is 5-4 and one game behind ELCO. They play each other this Tuesday at ELCO.

Section 5
Lancaster Mennonite continues to hold the top spot (7-1). The Blazers Defeated Leb. Cath. 64-33 Friday. LMHS has defeated LCDay 2 times this season. Both LCDay and Columbia have identical 4-2 records in section play. The section does not have crossover games so there are game nights (Tues and Fri) where some teams won’t play at all or are playing non-league games to fill in the schedule. LCDay/Columbia game was ppd. this past week. The AC Dutchmen are still in the hunt with a 4-3 record.

Looking ahead…
It’s getting to that point in the season that teams are checking the District 3 power rankings. We posted the link to the power points page on llhoops.com. The Powerpoints are updated often and the date of updating is on the page. We have also included on the llhoops page how many teams qualify for each level (for some reason D3 does not do this).

6A: As of Jan 21st, some observations. Section 1 has 5 teams that COULD qualify. McCaskey is teetering at 13th and Penn Manor is at 15. Crest is in a solid position at number 2. TWP (11) and Hempfield (12) are on the edge as well. The 6A has 12 qualifiers. The good thing about Section 1 teams is that that play all 6A teams for powerpoint. The bad thing is that they play each other down the stretch so wins are of the utmost importance.

4A: Lancaster Catholic is heading up the LL delegation at number 5. New comer to District 3 playoffs , Octorara, is 6th and ELCO is hanging on at 9.

1A: LCDay is currently 4th..Lebanon Cath is on the outside at 12 as the top 10 qualify.

We will be checking with the power rankings coming down the stretch drive.

LLhoops live streaming…
Our Warwick/Penn Manor game was canceled due to a scheduling conflict. Our next LL game is scheduled for Jan. 29th as Hempfield travels to TWP. Berks Beat has several games scheduled between now and then. The link of the streaming games goes live around 7:00 on the game day. ALL our games are archived

All games begin around 7:15 of game day. Click HERE

We MIGHT be covering the LL boys finals this season. Some depends on scheduling and some depends on sponsorship of the game. If any one/business wants to be part of our broadcast, please contact us.

Player of the game features has received a lot of fanfare.

Misc. thoughts…
Larry Locker of Etown was recently our player of the game (Lebanon/Etown). The award features a shirt with the llhoops logo. He commented to our color announcer (Doug Kraft) that he was thankful for the LL (Larry Locker shirt). 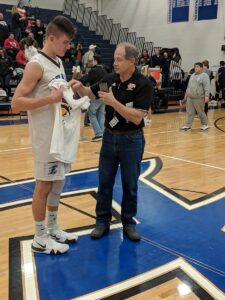 Warwick was awarded the “Section 1 champ.” Unofficial title last week as the Warriors were unbeaten vs. Section 1 teams.

Getting 1000 points is quite an accomplishment…and all teammates should be proud as well – “it takes team”. I had a saying from Larry Brown when he was at Kansas (Danny Manning and the midgets) basically saying when one part of the team is honored then the entire team is honored. Very appropriate.

PM Wall of Fame…As I attended the banquet for PM wall of fame, I thought about LLhoops past and present players. I know that the various schools honor and would be more than willing to post a picture of past LLhoopsters on our website. As many of you know, I coached Aaron Dread back in the late 80’s. The bond between coaches and players is difficult to describe. For Some there is not a bond: for others there is a respect for each other: and for others a bond that will last a long time, whether the player/coach stayed in touch or not.

For Dell there was a sense of pride in seeing a past player receive a well-deserved award. I know many who asked why Aaron was not in before but sometimes things take time. Some folks took the time to advocate for his induction as well. Some of Aaron’s old teammates spent some time reminiscing about the old days – “we deserved to run” 🙂 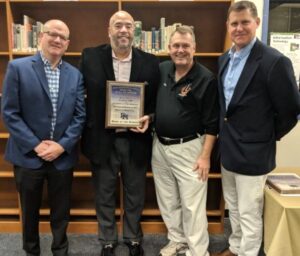 On the downside, I reflected on how many players I coached and did not stay in touch with for various reasons (mainly just life and how people go in different directions). I was saddened that  I had not made more of an effort to stay in touch. My hope is that most (noticed I said most as in coaching there will never be an absolute all in – never) of my past players took something positive out of the time we spent together.

As LLhoops has covered the LL for the past 19 yrs, there have been sooooo many player/coach relationships during that time. We tend to feature the top teams, but all players and coaches put in a tremendous amount of time and effort into the season. Teamwork in our sport is so important. Dealing with tough loses, blowouts, close games, game winning shots, and decisions made on and off the court affect all involved.

LLhoops strives to post the positives about our sport. Always trying.

Site me
With Warren Goodling onboard, we have a wealth of knowledge about some LLhistory. Doug Kraft helps provide some insights to the current set of players. Andy covers the LL like no other. Eric Thomas behind the mic on LL live streaming games is a pro’s pro.

Neast beat (Jon K) is providing his usual outstanding coverage of the northeast. He is also doing some rankings on his section LLhoops.

Bruce Badgley has been focused on live streaming games and doing some video clips of Berks Co Games.

Brain P of District 11 has been also shooting some clips of games in District 11.

We average about 2000 users a week with around 20000 page views per week. This number has been very consistent all season long. We look for an up-tick when the playoff season is upon us.

Don’t look now but the are only a few weeks left of regular season play:)