Down me..
LLhoops was down for 2-3 days. As some of you know, we depend on various folks to keep us running. Sometimes, in the past the site would be down briefly only to pop up soon. Well, this was not the case. After multiple “chats” and a few phone calls, we needed to pay the server folks to find out what was wrong and fix- we were told 24 hrs…well 48 hrs later and a down site (not sure what we were paying for to start but)….So another call and finally things up and running. Apologies to all. Some things waaaay out of our control. I was informed the District 3 page was down for a bit as well–so maybe not feeling soo bad..maybe.

Andy and I were out to games but could not post anything until Thursday. I have to admit it was sooooo strange not posting scores, updating standings, and posting new information on game day. The only good part of the entire ordeal was that I had the opportunity to watch some NCAA (wonder what game I was watching? 🙂

We did get some encouragement from one of our followers, Art Schomp Jan 23rd “Two days and counting without access to the Best High School basketball website @LLhoops ” Got to love the love!

The week that was…
Dell saw Crest/TWP and Hempfield/Crest this past week.

TWP 74 McCaskey 68
TWP got up early on McCaskey. The Streaks used their height advantage to open a slight lead for most of the game. McCaskey would come back time and time again but never would get the lead. Tyler Crespo would seal the deal in the forth by controlling on the offense end. The Streaks made a bunch of fouls shots in the fourth 13/14 to avenge an early loss to McCaskey. The Tornado is moving the ball well, but they are just a few plays away form getting some key wins in Section 1.

Coach Johns after the game

Crest 62 Hempfield 41…The Falcons had an early senior night – parents decided on a Friday night for a better crowd, and it was a good crowd. The game started out slowly as is normally the case for these 2 teams. However the Falcons would use a stifling defense to cruise out to a 33-11 halftime lead and never looked back. Logon Horn (22pts) for the Falcons was determined to make sure Crest avenged its early loss to Hempfield.

Coach Smith after the game

Plugging a Sponsor..
It’s tax time. I have used John. Lichty’s services for over 30yrs. John will work for everything you deserve on your taxes. He is easily accessible and handles ALL issues with the IRS.
If you need a tax advisor, give John a call and tell him LLhoops sent ya 🙂 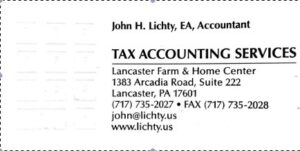 Looking ahead..
There are only 2 weeks left of the regular season. Section 1-4 teams play 13 games. Some teams have 2 LL games left others have 3.

Key games this week include:
All Section 1 games (4 teams still alive for 2 slots in the Las and ALL teams have a shot at a berth in the District 3 tournament- top 12 qualify in 6A.

LS @ Lanc Cath on Jan 29 feature top Section teams (3 and 4) playing each other.

Jan 31 features Etown at Hempfield. This game will count in LL standings for both teams. Etown is in control of an LL slot, but Hempfield is battling for its playoff life both for the LL and District 3 slot.

Cocalico travels to LS on Feb.1 for an interesting matchup- ditto ELCO at Spot

LL game this week will feature Hempfield/TWP on Jan 29. The games will come online around 7:15 on the game night. Replays are on our llhoops Utube page. We have had some bumps on this new feature on llhoops this season, but all in all the quality of the broadcast is very good. Eric Thomas and Warren Goodling form a GREAT team for calling the game.

LLhoops has secured rights to broadcast the LL finals on Feb. 15th at TWP. As always if anyone wants to sponsor our game, please contact us webmaster@llhoops,com.

Special thanks to the LL Coaches Association for helping us with streaming. The coaches at the games have been extremely helpful providing us with information and access to players.

Whats is a walk?
Check this video out- shared by LL refs on the spin move. Good information for all.

Showing some love…
I thought it would be good to write about some the the teams that are battling and might not get the press that the top dogs receive. Lets look at 3 teams this week.

Annville-Cleona (4-3 LL)…the Dutchmen are currently in the hunt for a final LL spot. Jason Coletti was a late hire for the Dutchmen and did not get a lot of off-season work in with his players. But, AC is currently 4-3 and one game back for an LL slot. Their biggest win this season was vs. Columiba- 64-46. Columbia and LCDay are one game up on AC for the final LL slot in Section 5.. The Dutchman are led by Andrew Long 5’11” Jn (15 peg) and Adam Long 5’8” jn (9 ppg) Twins? ahh that would be a yes!, and we were informed “they are great kids” :). AC is averaging about 50 ppg. and are grinding out some W’s. the Dutchmen are currently 9th in the power points for District 3. Top 8 get in…who’s above them? – Columbia.

Garden Spot (7-3)…We have another first year coach, Nate Musselman, leading his team to a winning season. The Spartans feature a one-two punch with the fiery spark plug guard, Keontae Nunn (5’7” sn) 16 ppg and an underrated big man in Andrew Zenter (6’7” jn forward) 11 ppg. Spot is 3 games behind LL and 2 games up on Cocalico. Their biggest W recently was a 50-48 game at Cocalico. The Spartans made a big push last season in the LL’s, Districts, PIAA. With Nunn and Zenter playing at high levels, the Spartans will not be an easy out down the stretch. As of Jan 27th, the Spartans are #14 with 16 teams qualifying for District 3 playoffs…and BTW @GSSpartanSports always keep us up to date on Spot scores and schedules- much thanks.

ELCO (6-3 LL)…the Raiders are in second place – 2 games back of Lancaster Cath. The Raiders lost a close game at Lanc Cath 42-40 (edited score), but followed it up with a W vs Octorara (42-37) avenging an earlier loss. Coach Brad Connors has had a lot of success at ELCO, guiding the Raiders to distract qualifiers in 3 out of the last 4 years—this year looks to make it 4/5. The Raiders feature top underclassmen Braden Bohannon (6’ Soph) 13 ppg, Bryce Coletti (5’11” jn) 11ppg, and Asher Kemble (6’5” jn) 10 ppg. The Raiders have 3/4 road games to finish out the season. With one more LL win they will clinch the second slot in. Section 4. The Raiders are 6th in 4A with 10 qualifiers. This year the Raiders have been good..they might be a lot better next season!

LL Brackets…
Here is the link.
LL  clinching teams for slots (notice we noted slots and not champs): LS and Warwick…both are in the LL’s. Some others should clinch this week…and of course we will post tie breakers next week as well – always interesting. The LL plays off for tie for first. Ties for second are NOT played off.

District three power points
Here is the link
We were told by some coaches that all games count up to Feb. 7th. First night of LL playing games is Feb. 8th.

Enjoy your last 2 weeks for some 🙂

LL Trivia...As of Jan 27th, the Section leaders are Crest, Warwick, LS, Lancaster Catholic,  and LMHS.
Out of these teams, which one has the most LL tiles in the decade 2000-2018?