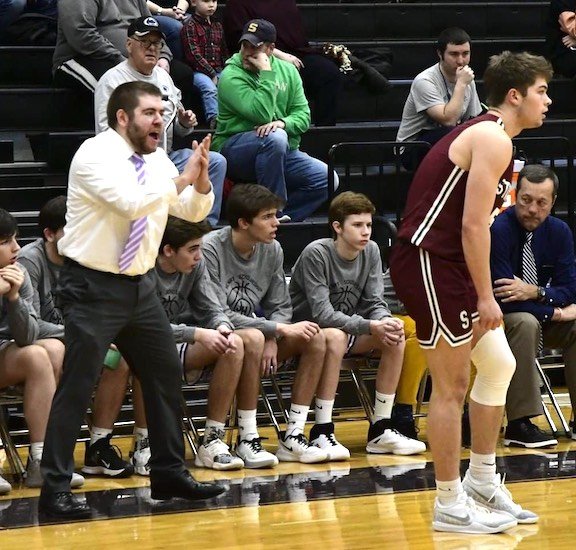 Ed note: Ephrata’s new leader is Coach Scott Gaffey. If the Gafffey name rings a bell, well, it should as he comes from a big-time hoops family tree. He gives us some of his thoughts as he starts his new gig. 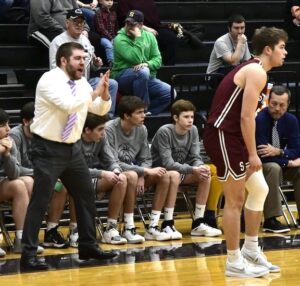 1) Give our LLhoops followers your background.
I grew up in Palmyra Pennsylvania and went to Palmyra Area School District until my junior year of high school where I transferred to Harrisburg Christian for my junior and senior year. While at Harrisburg Christian I was a team captain on the first team in the school’s history to qualify for the PIAA playoffs. After graduating from Harrisburg Christian I went to St. Bonaventure University in Olean New York and majored in elementary education. With regards to coaching I served one year as a varsity assistant with my father at Bishop McDevitt H.S. when the team made a run to the elite 8 in states. After that I spent two years as an assistant at Manheim Central with Chris Sherwood. While at Manheim Central in 2017 we were LL Co-Section 2 Champs as well as a PIAA qualifier. Following my two years at Manheim Central I served one year as a varsity assistant at Portville Central School in NY state where I completed my student teaching. Following Portville I became the head coach at Mifflin County. I was the head coach at Mifflin County for the previous two seasons. Mifflin County is a 6A program that competes in the Mid-Penn Commonwealth and District 6.
2) So you have had some face to face with your new team, what are your thoughts on how the players are reacting to a new coach? 🙂
I think so far our guys have really responded well to having a new coach in our first couple open gyms. I have been extremely impressed with how hard our guys compete at both ends of the court. We are asking guys to do some things differently at the defensive end this year and that will require some changing of habits, but so far our guys have really embraced everything that we are asking them to do. With Fall sports going on I have not been able to see all of our players in person yet, but I have been impressed with the guys I have seen, and I’ve been impressed with the other guys in the film I’ve watched on Hudl.
3) The Gaffey name has a LOT of history…Can you tell us some of the family tree and how they have influenced you in your coaching career?
I am very lucky to come from a family of coaches. My grandfather Bill Gaffey won two state championships as a coach at Bishop Guilfoyle and Susquehanna Township, and my father Mike Gaffey has won three district championships, one at Palmyra and two at Bishop McDevitt. Growing up I had the opportunity to both play for my father, as well as coach with my father. Obviously between both my father and grandfather I learned so much with regards to X’s and O’s, but even more profound has been their influence on me as a role model. I have learned so much from growing up with them about developing relationships with both players and parents and how to get the best out of every individual student-athlete. Between both of them they have come across every coaching and basketball situation/scenario imaginable and I am always able to call them to get advice on how to get additional ideas on how attack a certain defense, or a new zone set to add in, tips for how to motivate a certain type of player, and so on. 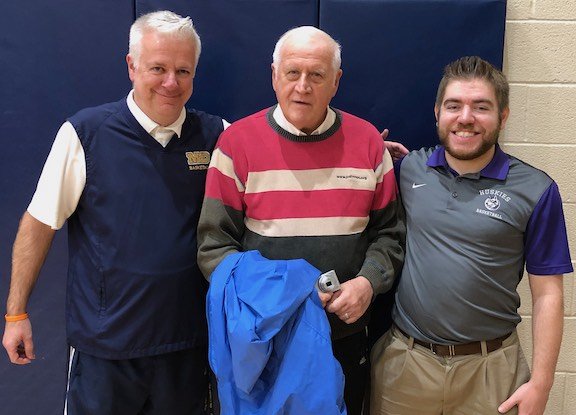 From left to right: Mike, Bill, and Scott

4) What are your biggest challenges getting ready for a new season and a new league?
I think one of the biggest challenges this year along with every other team is navigating the basketball world with the presence of COVID-19. Luckily I have been able to get in the gym and work with my guys at Ephrata and we will be able to participate in the Fall League at Spooky Nook. Ideally I would have liked for us to have a college shootout to attend in November as well, but those have almost all been cancelled for this year. As far as a new league I am lucky that I already have some experience coaching in the LL with my two years as an assistant at Manheim Central and have a decent understanding of the officiating style and play style of the LL. As any new coach in a new league I think one of the biggest challenges  the first year is getting to know the other teams and coaches in your league and what different coaches tendencies are. However, with that being said I think it can also work as an advantage because while you are trying to learn about them, they are also learning about you. We are also in a unique situation in Section 2 where three of the five schools have a new head coach.
5) Is your coaching style a system one or adapt to what you have on your team? ..and how are you blending that into this season?
This is a very good question. In all honesty it is a combination of the two. Obviously as a coach I have basic principles and beliefs that will always be there regardless of personnel such as making the extra pass, being the first to the floor, ball movement and player movement, being able to mix up our defenses, and so on. I think as far as our primary defense and offenses go that is something that can be fluid and changes with your players and your personnel. Some years we may be primarily a man to man team and other years we may play more zone and that will depend on personnel. Offensive schemes will be similar from year to year but will also be fluid again based on the players we have that year. As far as blending that into this season we have already started to put in offensive and defensive schemes that I believe will play to our strengths this year based on the returning players I have seen in person and on film, as well as talking with returning coaches from the previous staff.
6) What are you goals for the season and beyond?
My goal for this season is for us to ready and prepared to compete night in and night out regardless of the competition. It is no secret that last year Ephrata struggled and finished 0-22, but I believe that if we are prepared for every single opponent and play as hard as we can that we will be competitive against all of our opponents this year. My goal is that by doing that it will equate to wins and we will have the opportunity to compete for a spot in the LL League playoffs, as well as the District playoffs. When it comes to future goals my goal for our program is that we are competing for LL championships, District Championships, and PIAA Championships.
7) King for the Day—what changes if any, would you make the the high school game?
Another excellent question. I am going to give you my opinion on a somewhat controversial issue for high school basketball in Pennsylvania. I believe that Pennsylvania should issue a 40 second shot clock. In my year as an assistant at Portville Central School the shot clock did not have a negative influence on the quality of play in any shape or form. I think in recent years the overall skill and ability level of high school players has greatly improved and makes it more conducive to having a shot clock. I believe any coach from this past year could almost go back and count on their hand the number of possessions in the first 3 quarters of games that went longer than 35 or 40 seconds. At the end of a close game it allows for more strategy and less fouling. If I had my choice I would implement a 40 second shot clock in the PIAA.
~Dell Jackson