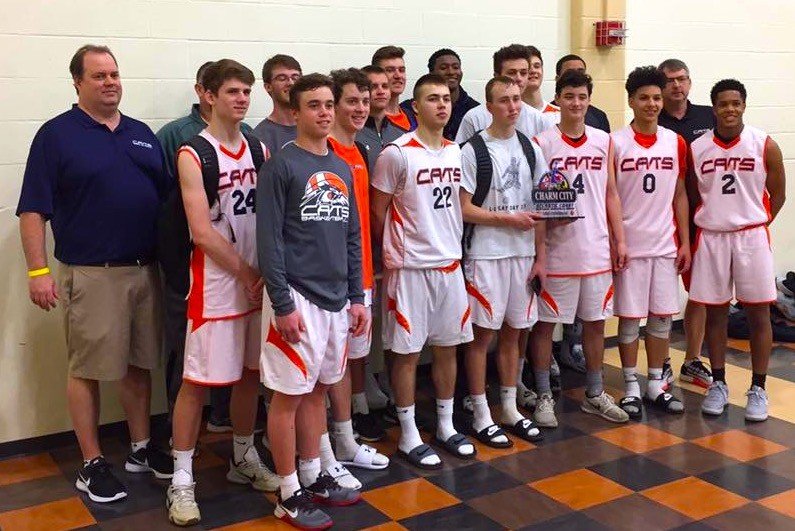 This is after both our teams advanced through to the championship game of the Charm City Classic at Millersville University in April. We didn’t play the final and shared the title.- D Kraft

LLhoops caught up with Doug Kraft in August 2018. Coach Kraft mans to under 17 crew for the Cats- basically a team made up of LL players. The program has grown and been very competitive. You can find Doug at MANY LL games throughout the season. Some interesting info. This is the secomnd time he has joined the LLhoops interview- sure it won’t be the last 🙂  Enjoy!

1) Llhoops has been following the Cats via your twitter account. Can you take us thru your season?

This year our 17U season ran from mid-March through July. We really broke it down into 3 segments.

The NCAA Division 1 live periods are in April and July, so we play in NCAA certified events during those weekends and we’ll look for cost-effective, quality competition as best we can outside of those weekends.

This year we kept 20 guys which allowed for competitive practices and the ability to field two teams for most tournaments.

*We advanced to the finals of the Platinum (B) Bracket of the highly competitive Hoop Group Pitt Jamfest at the Pittsburgh Convention Center. We went 5-1, losing to Team M.O.A.M out of Florida, 64-58, in the title game.

*Our 4th annual College Coaches Night was another success. The Thursday night before Mother’s Day we close our first segment with this event. We invite the coaching staffs of most every Division 2 and Division 3 school in the Middle Atlantic into our practice to observe/evaluate our guys. We had 39 coaches from 25 different colleges attend. We invite our guys’ high school coaches to attend as well and then host a social afterwards giving time for all to spend time together. Without a doubt it’s the best thing we do.

*Practice moves to once a week. We take 4 weekends off so guys can focus high school team obligations.

*We played in tournaments at Millersville and Mount St. Mary’s in front of those coaching staffs.

*We cut down to one team to prepare for the 3 Division 1 live recruiting weekends. We played at the Basketball Summer Championships in Springfield, MA; The Hoop Group Summer Jamfest at Spooky Nook; and Elevate Hoops Summer Final at King of Prussia. We played in the Elite (A) Bracket in every tournament. We went an combined 7-4 in those high-level events, which was our best-ever showing at that level.

2) Can you share your roster and what schools the players attend?
This year our roster included:

3) What type of logistical issues do you face for practice, games and organizing players?
Really the hardest part is finding the time to do it all. We have a great partnership with Lancaster Bible College for a practice facility. AD Pete Beers and Sarah Wilcox do a lot for us and others to make LBC a home. Rich Hinnenkamp at Lancaster Catholic and Zac Kraft at Lancaster Country Day stepped up on the rare occasions when Bible wasn’t available. (It pays to know people).

I personally decide on which tournaments we play trying to balance competition and cost. I never play tournaments on Mother’s Day or Memorial Day because I don’t want our moms in the gym on their day (sorry Kathleen Holmes) and I don’t want to be in the gym on Memorial Day weekend. We get great cooperation from our guy’s high school coaches. We know when they have open gym, summer league and team camp and just roll with the punches.

We try to have clear communication with our players so there is very little unexpected conflict. We deal directly with the player. We make them take ownership of their schedule. At our age level, our guys are capable of handling things. Or at least they should be. The harder part is making sure mom and dad don’t try to do it for them.

4) How do you pick your team?
Our tryouts really run during the L-L League season. We watch the league. We stay in touch with the high school coaches to find out who may be looking for an AAU team. Word of mouth has spread the good vibes. Our former players are great in making sure I know of guys coming up. It’s all about relationships. And positive results and experiences. The Class of 2014 had 4 guys move onto college basketball, 2016 had 6, 2017 had 5 and 2018 has 7. That’s 21 guys off 4 teams. They can attest to their experience with Cats. We could have as many as 10 from this year’s group move on.

We are now in a spot where many guys pick us.

5) Do college coaches contact you about your players or players you have coached against?
In terms of our players, they contact me all the time. When we play in live events all levels of coaches see us play. There is constant follow up. I probably take a text, social media DM or call about recruiting every day from now through next May. Then we start up again.

Once in awhile I will get asked about a kid on another team. I really don’t like sharing anything about a guy I don’t know as a person. I will talk about what level ability he has.

Bonus: Most HS coaches talk about building a program. You have new (mostly) players each year. What are your future goals for the Cats?
That is a killer good question. I evaluate this all the time. This costs me time and money, so I first have to make sure it is not detrimental to my family. My wife, Terry, has been ultra supportive. But we love beach weekends and they pretty much go bye-bye with AAU.

My original goal when I got involved with Cats was to help our team become competitive enough to keep the best local kids playing AAU on our local team. It has taken time but I feel we have done a good job with that. We used to have kids leave to play on Philly-based teams or teams like the Jersey Shore Warriors. This year was the first time we played the Warriors’ top team. They were a bit down this year but we were up double-digits in the 2nd half at the Summer Jamfest. Winner advances to the Sweet 16. I felt our team was better. We just didn’t make the plays we needed to and we ended up letting the game slip away. But I looked at my assistants, Dave Evans and Tom Wernoch, and said we’ve come along way.

In the end, however, our goal will always be to help guys get better and to help raise the bar for L-L Hoops. 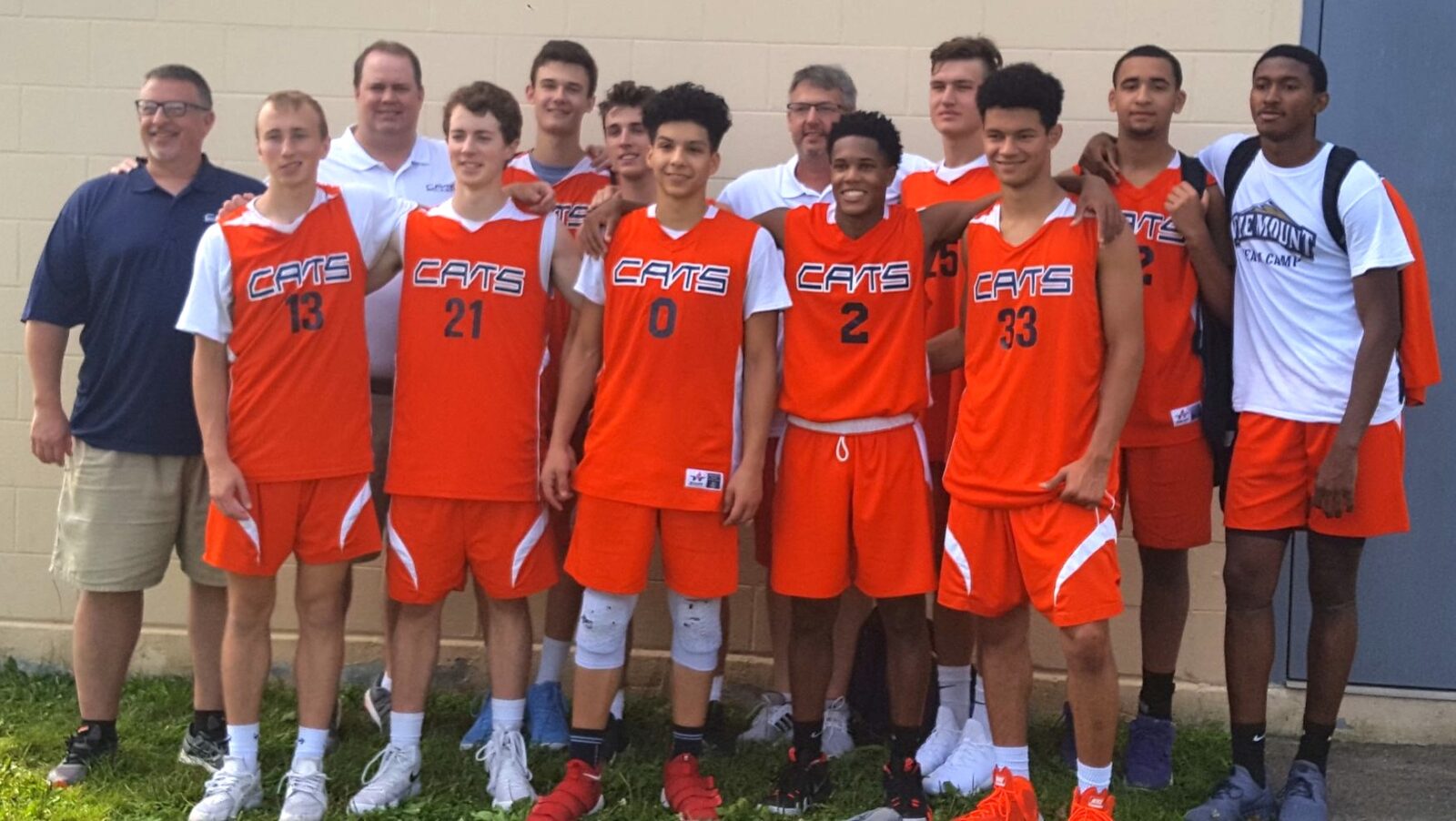 This was just after we ended our season with a win in our last game at Elevate Hoops Summer Final at King of Prussia in July. We went 7-4 in Elite Bracket play during the NCAA Division 1 live recruiting period. This team was one of, if not the best, we’ve had.- D Kraft