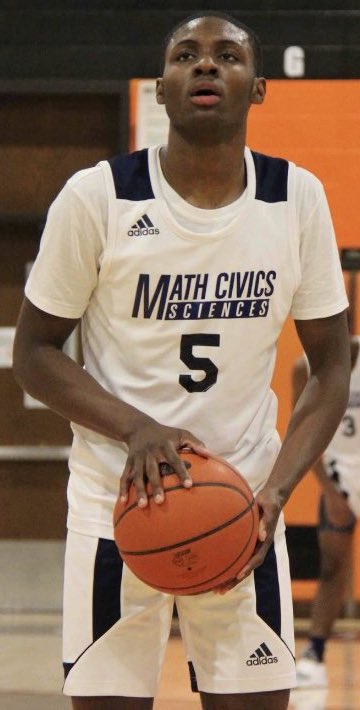 The emergence of Philadelphia charter school Math, Civics & Science as a power in Pennsylvania high school basketball has come alongside the emergence of Mighty Elephants’ junior guard Nasine Poplar as one of the state’s best players.

MC&S won the state Class AA championship in 2019, and was still playing, in the quarterfinals, when the coronavirus pandemic ended this season. Perhaps more impressively, the Mighty Elephants won this year’s Philadelphia Public League title, knocking off Class 6A power Simon Gratz in the championship game.

Poplar, a 6-4 combo guard who has become a major-college recruit, is the AA player of the year, an honor that goes to the leading vote-getter for the Pennsylvania Sportswriters AA All-State-team, announced Tuesday.

Poplar, who made the all-state second team a year ago, averaged 22 points and five rebounds. He has college offers from Maryland, Auburn, Penn State, Temple, St. Joseph’s, Miami, Wichita State and Virginia Commonwealth, among others.

Another Philly Public Leaguer, 6-0 senior guard Keshaun Hammonds of Constitution, made the first team for the second straight year.

Also on the first team: Northstar senior guard Andy Zuchelli; Abe Atiyeh, a senior guard from Moravian Academy, and teammates Jake DiMichele and Dante Spadafora from Our Lady of the Sacred Heart in suburban Pittsburgh.

OLSH was 26-1 and through to the state quarterfinals when the games stopped, having won it’s two state-tournament games by a combined 76 points. Its coach, former FBI agent Mike Rodriguez, was voted the AA coach of the year.

Tyler Fritz, a 6-3 senior from Marian Catholic, made the team for the third straight year. He averaged 28.08 points per game.

All-state for the second straight year: Hammonds; Poplar; North Star junior guard Andy Zuchelli, who averaged 26.4 points in leading his team to a 24-3 mark, District Five title and the state quarterfinals; Jessiah Witherspoon, a 5-10 junior who led averaged 16 points, three assists and three steals and led Bishop Guilfoyle to the District 6 title and state quarterfinals a year after the Marauders reach the state final; Malik Ramsey of California, who averaged 22.5 points after averaging 25.3 as a junior; and Isaac Marshall of Academy of the New Church, who averaged 17.6 points, 4.2 rebounds and 2.2 steals per game.

The all-state team is the result of nominations and voting from a panel of sportswriters throughout the state.