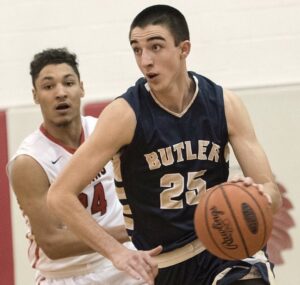 Ethan Morton- 6A Player of the Year

Ethan Morton is a point guard living inside a big man’s frame.

The Butler senior goes 6-6 with a 6-10 wing span and has the ball skills and mental approach to set up his teammates before thinking about shooting.

His hybrid game helped him earn a full ride to Purdue, lift Butler to its first district title in nearly 30 years and net Player of the Year honors on the Pennsylvania Sportswriters Class 6A All-State team.

“He has a unique skill set with his size,” said Butler coach Matt Clement. “He’s a winner and he just makes everybody on the court better. He’s been that way since he was in second grade.”

Morton was named Pennsylvania Player of the Year by Gatorade and Maxpreps.com after averaging 23.4 points, 12.8 rebounds and 8.4 assists as a senior. He scored a school-record 2,198 points, 33 in a triple-double performance against top rival Pine-Richland which saw him net 23 rebounds and 12 assists.

“The first time I saw him, he was in second grade and I said I’ve never seen anything like him,” said Clement, “and I still haven’t.”

Morton is one of two repeat first-team All-State selections, along with Coatesville’s Jhamir Brickus. They’re joined on the top line by Erie McDowell’s William Jeffress and Roman Catholic’s Jalen Duren, both second-team picks a year ago, and Methacton’s Jeff Woodward, a third-team pick last year. The lone newcomer is Wilson junior Stevie Mitchell, a 6-2 guard.

Wilson’s Matt Coldren is Coach of the Year after taking his alma mater to its first District 3 championship and to a 28-1 record, tied for the best in the state with Loyalsock.

The 6-9 Duren is ranked among the top three sophomores in the nation. He averaged 17 points and 12 rebounds.

Brickus, a 5-11 senior guard, averaged 23.1 points and is his school’s all-time leading scorer with 2,334 points. He’ll play at LaSalle next season.

Woodward averaged 13.8 points and 10.8 rebounds in helping Methacton to a district championship and the No. 1 ranking in the state. He”ll play at Colgate after setting program career records for points (1,448) and rebounds (1,139).

Mitchell was named Berks Player of the Year after leading the league in scoring at 22.3 points and leading Wilson to league and district titles. He’s the Bulldogs career scoring leader with 1,496 points and can become the first in program history to lead the team in scoring four straight seasons.

Morton is one of the most heralded players to come out of the WPIAL in decades. He was a Post-Gazette Fab 5 and all-state selection three times, and a two-time Post-Gazette Player of the Year.

He had nearly two dozen college offers, including Indiana, Wisconsin, Virginia, Vanderbilt, Stanford and Iowa. College coaches were taken by his ability to distribute the ball.

« 5A Boys Coach of the Year: Tyrone Nesby, Muhlenberg – via zoom
PA Writers Boys All State Teams: All Classes »