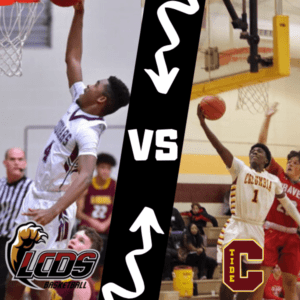 Ed note: Due to some logistics issues, this wrap is a bit late. LLhoops live-streamed this game, and Ke’Shauna Damore was helping in the production. She gives us some post game thoughts.

The last time the Cougars and Crimson Tide met, the Tide reigned victorious in a 50-42 win. This game was similar in that the Tide claimed a 54-45 ‘W’. The Cougars had control at the half of the second match-up between the two, but the Tide came out on in the third quarter strong, outscoring the Cougars, 13-2. Lancaster Country Day failed to come back in the final quarter despite their 14 points.

The first quarter opened with 6’5 senior captain, Greg Mizzi, winning the tip off over Columbia 6’4 junior forward, Brady Smith. The score remained 0-0 until later in the first on a bucket by Lancaster Country Day’s Grant Landis.

Matt McCleary, 6’2 senior guard for Columbia, poured in the Tide’s first five points before being pulled out of the game after three fouls in the first two minutes of game-play. “Losing his leadership was huge,” Columbia head coach Glover stated. “I had to get on some other guys to step up and ride to the occasion.”

Stepping up in this game were sophomore Kerry Glover and junior Michael Poole Jr., each of whom had a combined nine points in the first half.

Despite Columbia being the top team in L-L Section Five, Lancaster Country Day played to the Tide’s level of intensity, going into halftime with the score tied at 23-23. Lancaster Country Day’s Grant Landis said he was, “Very confident going into the game since we had put in a few new sets to get our offense prior to the game.” Landis provided the first bucket for Lancaster Country Day and finished with 14 points. Landis rose to the varsity squad this season after watching eight seniors last season as a sophomore.

“It’s been awesome. I’ve been working really hard all off-season to do what I could to step up and provide for the team when they need me,” said Landis. Coming into Thursday night’s game against Columbia, Landis had logged 21 points and 17 points against Tulpehocken and Lebanon Catholic respectively in the Cougars’ two previous contests.

Entering in the second half, Matt McCleary came off the bench and rejoined Crimson Tide teammates Kerry Glover and Michael Poole back on the court. Matt McCleary, LLHoops.com Player of the Game, said, “My team needed me. I knew I had to keep my cool.” Remarkably, the 6’2 Columbia senior eventually finished the game without committing an additional foul.

On losing the third quarter lead, Grant Landis stated, “I felt like we were executing very well in the 4th quarter. Some of our shots just weren’t falling like they did in the previous quarters.”

McCleary put an emphasis on foul shots after last week’s loss at the hands of the Tide’s district rival, Trinity, when he stated, “We needed to work on free throws,” after seeing missed foul shots lead to Columbia’s downfall in their 52-66 loss against the Shamrocks.

Though this was another league loss for Lancaster Country Day, Lance Lennon and Grant Landis still remain as of the most prolific duos in the L-L league with Lennon averaging 14.53 and Landis averaging 13.08 points per game respectively.