PM/Hempfield comes down to the wire

Hempfield controlled most of the first half with Eli Washington putting on a scoring display – 17pts for the quarter.
However, the Comets would hit some key three balls paced by Jn. guard Ethan Hine (10 in the half), including a rare 4 pt play.

The Comets put up 19 in third and stretched the lead to 11 at one point in the fourth only to see Hempfield come all the way back to tie it on a three ball by Washington. 58 all

With no timeouts left, the Comets co0ly walked the ball up the floor and Kevin Roldan drilled a 3 ball with 3 ticks left. Hempfield had no timeouts and the game was over.

Eli Washington led the Knights with 26. 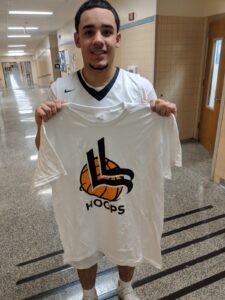 Andy Herr will have better description and recap of this game later.

Misc thoughts…Fans were into it, with both sides having chances to cheer when their team was up. Nothing like a last second W. Tough on the losing team, but great for the winning team. Both teams evenly matched…Could be preview of most Section 1 games this season.

PM fans after the game 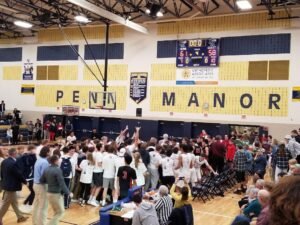