Disclaimer: LLhoops is NOT affiliated in any way with the Lancaster Lebanon league. The LL Boys Coaches Association chooses to help sponsor this site, but opinions are exclusively LLhoops.com. Links to our site are acceptable. All other material is copyrighted. Pictures/audio/video can be purchased/used with permission from LLhoops.com.

“I think the playoffs are loaded with talented teams this year, and on any given night any team could win this thing. I would think that Hempfield and L-S are probably the favorites and if they get the opportunity to play in the semi’s it will be one heck of a game. We have been here before and know it is a one game at a time season.” 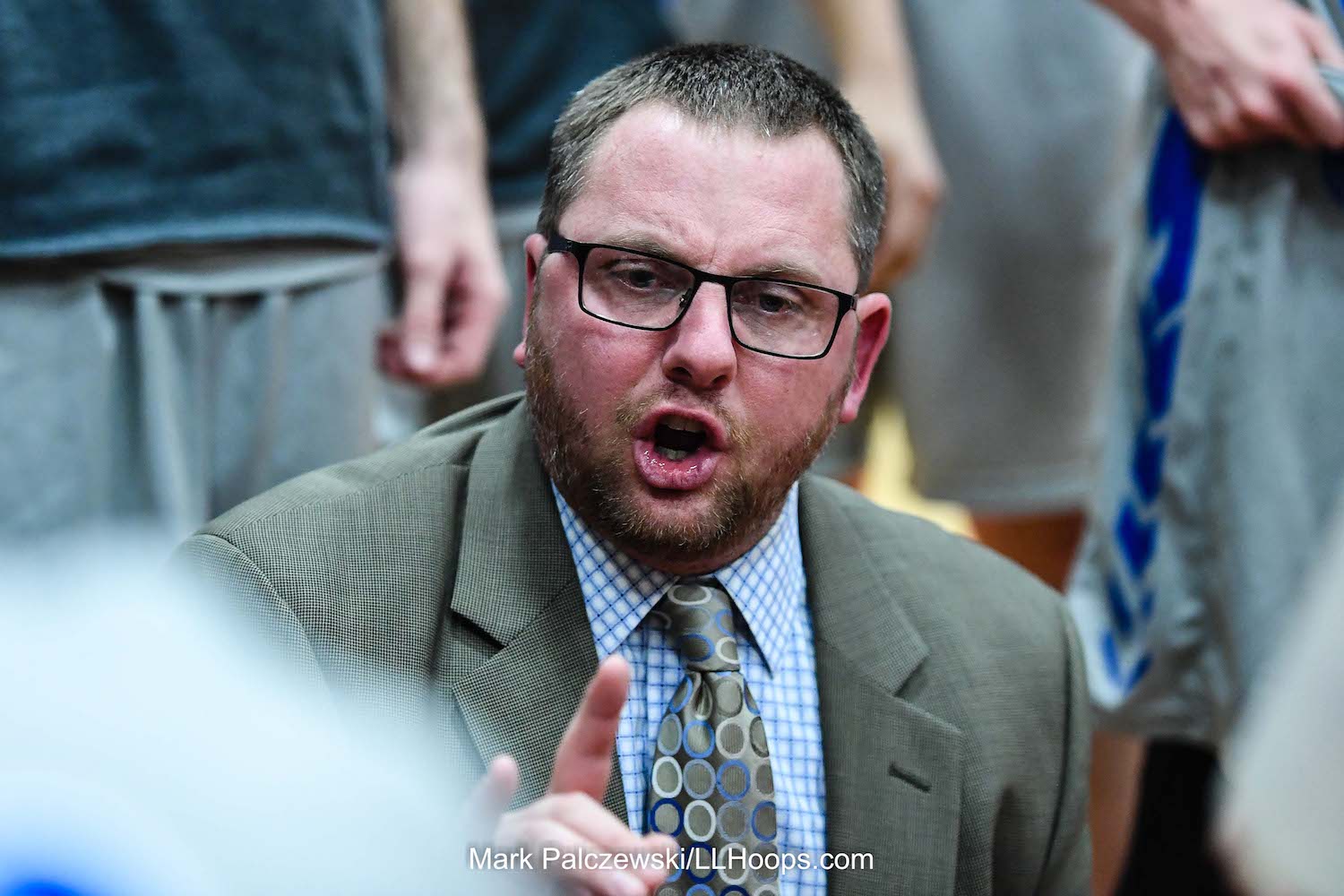 Hempfield is entering the contest on a 6 game winning streak. The Knights claimed the Section 1 title early last week. Their only LL loss was coming at Crest. Key wins for the Knights include Carlisle, Wilson and Crest. This will be Hempfield’s 4th trip to the LL’s since 2010. The Knights the title in 2010 and 2011. Hempfield can play at a fast of slow tempo, has strong players, and feature 1000 point scores Ryan Moffatt. The Knights are coming off a great run in the PIAA’s last year and have the most playoff experience on the floor.

Northern Lebanon is the 3rd place qualifier from Section 3. We received some notification

early in the season about players to watch from followers- “Watch Light and Yeager” Well, the Vikings overcame some injuries and proved to be a tough out most nights in LL play. They took Lanc Cath to the wire 2 weeks ago and split with LMHS. Key wins for the Vikes: LMHS, Palmyra, Manheim Central. This is the first trip to the LL’s for Coach George, but the Vikings second appearance since 2010. The Vikings are led by the top-scoring duo of Caleb Light and Alex Yeager.

LMHS is no stranger to the LL’s. This is the Blazers 7th appearance since 2010 in the brackets. Coach Groff enters his 11th year as a coach of an LL playoff team. Keys wins this season: NL, York Catholic, Boiling Springs. The Blazers played and lost to LS on Jan 3rd – 60-49. LMHS has played against LS’ 6’10” Ryan Smith and that will help them as they play the second time.

Coach Groff on playing LS, “We know firsthand how good they are!  Good teams can make you tentative, so we will need to find a way to overcome that tendency.”

LMHS likes to get it up and down. They feature a returning ALL LLhoops player in John Gillespie (13ppg) and a steady guard in Caleb Hurst (12ppg).

LS has 6 tournament appearances since 2010. The Pioneers won Section 2 for the second straight year under Coach Berryman. The Pioneers suffered 2 close losses in LL play (Etown and Epharta). Key wins this season include: Dover, Middletown, and Lancaster Catholic. No one can discuss LS without huge props to top scoring 6’10” Ryan Smith (20 ppg). Smith can dominate at both ends, has great hands, a double- double machine, and an excellent passer. BUT, this team features excellent guard play (led by Issac Beers (13 ppg) and three snipers.

Spot had to win a game vs. Solanco on Wed. just to qualify. The Spartans lost a key player

(Jacob Arndt -11ppg) in the game. No problem as the Spartans beat TWP (70-67) at Hempfield Saturday in the playin for 3-section format. Spot features guard play- fast. Keontae Nunn (12ppg) delivered a 29 pt performance vs. TWP backed up by silky smooth Jordan Skewbridge (15ppg). Key wins for Spot this season: TWP, Ephrata, Kennard Dale. The Spartans mix it up on the defensive end. This is a fun team to watch as they produce “wow” moments.

Lancaster Catholic went unbeaten in LL play. The Crusaders had some close calls (NL and LMHS) but rolled to a Section 3 crown. This is the most balanced scoring team in the LL, which makes them one of the most difficult teams to scout and key in on. LCHS has appeared in each LL tournament since 2010 (all). Coach Joe Klazas’ bunch won a district title last season, but this team is a new group. Catholics defense is outstanding. Key wins include: Bishop McDevitt, Spot, Central York. Key players = all but Johnny Besecker (11ppg) and Dwayne Caine (8ppg) are tough outs. BTW, Lancaster Catholic won the LL crown last season. 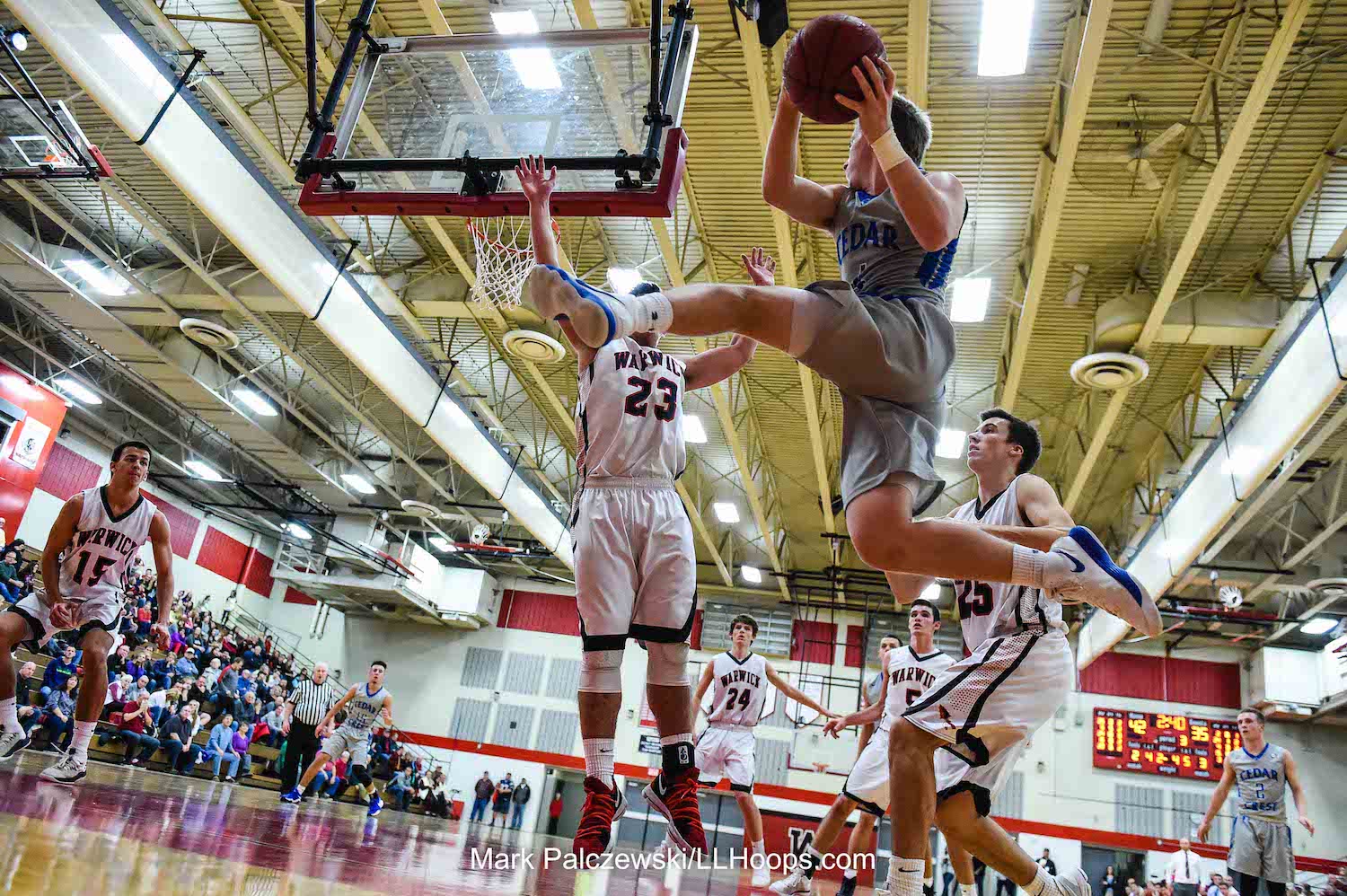 Crest, as always, is battle tested. The Falcons aren’t afraid to step out of the LL to get good non-league competition (York , Lower Dauphin, Williamsport). This will be Coach Smith’s 5th trip to the LL’s. The Falcons have 2 LL crowns in the last 9 years. Key wins this season include: Hempfield, Williamsport, and TWP. Crest will feature its patented dribble drive offense, keyed by Blake Thompson and Cole Laney.

Coach Smith on the Ephrata
“Ephrata is an experienced bunch of kids who really compete on both ends of the court. They have won a lot of games the past two years and are really hot right now winning 8 of 9 down the stretch. They can do a lot of things offensively which makes them a difficult team to defend.”

Ephrata enters the LL’s hot. Coach Treese has the Mounts primed entering the brackets. The Mounts are going back-to back as far as getting into the dance. They have their last 6 games. Key wins this season: LS, Etown and Warwick. Brad DaBella (13ppg) and Xavian Rodriguez (14ppg) are Epharata’s top player but is surrounded by battled tested mates. With the win vs. LS, Ephrata has the moxy to compete in this tournament.

LLhoops and the LL’s…
Of course we’ll be out and about. We will re-tweet scores and updates from games we are not at- as usual. We should be getting some game shots up on the site as well. We will try to get write-up/podcast/coaches quotes up on the site as soon as well.

From the sidelines: Busy week for LLhoops. Traveled to Spot, Donegal, Solanco, Hempfield to name a few. I had a nice chat with Donegal’s AD, Ron Kennedy about the Indians and the district playoffs. Donegal made a big jump this year by qualifying for District 3 play under new Coach Kevin Dolan. Coach Dolan USED to think LLhoops jinxed his team when covering a game- I officially proclaim the jinx OVER.

Spot rolled up M Central on senior night. I had a good time catching up with Kirk N at the game and he provided us with some shots for the site.

Spot at Solanco—first time for a while that I got to see a game in Quarryville. Coach Long took some time to talk with me after the game about his team the their future.
He has helped llhoops with info and scores-a class act for sure. Desiree DeHaven, Solanco, provided us with a photo gallery that day.

Spot/TWP…it has to be playoff time as the fans can get a bit “testy”. The game at Hempfield on a Saturday at 2 pm produced a small crowd but fans from both sides got into as the game progressed. The intensity was playoff quality. Thanks to Hempfield admin for setting us up with tables and rosters.

As always, thanks to the LL coaches for giving us time at games and answering emails. The LL Boys Basketball Coaches are now a sponsor of LLhoops.com

Twitter Poll
“What LL boys team has the most APPEARANCES in the LL plahyoffs since 1973?”
LL fans said Lanc. Catholic. 46% and that would be correct. Lanc Cath will apprear in 22 LL’s. Hempfield will be in it’s 21st this season. McCaskey has a total of 30, but the Tornado was not included in the question 🙂

Our non-paid edititor, Bob Swavely, and others pointed out we only have 3 section this year. So true. Eeech. Fake news? 🙂 – note disclaimer at the top of the page 🙂

Check out LL history only on Llhoops!

LL trivia #6
Last season Lancaster Cath. won the LL crown as a rep from Section 3. What was the last Section 3 team to play for an LL title?

Berksbeat….Bruce had over 5k hits ona dunk video last week. Check out his in game shots as he covers Berks Co playoffs this week. We are hoping to get Bruce and Andy together on some district 3 games.

3A: No. 5 York Catholic at No 4. Lancaster Mennonite

6A: No. 2 Hempfield, No. 4 Cedar Crest; 4A: No. 1 Lancaster Catholic all have byes for the first round of district playoffs”

Pict of the week/year! Coach Trupe after game.

Enjoy the games this week!

« DISTRICT 2 SCORES (2/5 – 2/11)
Solanco Fights Til The End Before Succumbing To DeAngelo, Sun Valley In Season Finale »