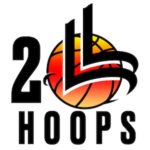 The week that was:

Flashbacks/Tboughts….Big week for LLhoops. With the snow postponements on Tuesday, the schedule got pushed all over the place. In fact,  some games are still to be played this week and beyond. A few thoughts from Dell’s games.

1) At the Hempfield/Crest game, I saw a contest where the three-ball was king. Hempfield had 8 and Crest had 11 – 8 of them by Trey Shutter. The scoring in the first quarter- 15-14 Hempfield- featured 9 three balls and only one 2 pointer.

2) Coastesville/McCaskey. I know the place is crowded when I’m parking in the elementary parking lot. The staff closed the doors to folks before the tip as the gym was over flowing. I got so caught up in things that I was taking videos of the JV game. In a fitting end to the night,  McCaskey came back late from a 6 point deficit and scored the last 12 points for a very emotional win.

3) Hempfield/TWP. LLhoops 2nd live-stream game of the year. This was not the high-flying affair from the Cville/McCaskey game, but rather more of a chess match. Hempfield was behind most of the way. The Knights claimed a ‘W’ on a last second follow by David Sears, 6’4” jn. Check out the final play call by Eric Thomas on the replay—very special. Very.

4) LL/Mid Penn shootout at Man. Central…Could Dell watch 6 games in a day for 2 weekends in a row? No…but he got to watch 5 of the 6. It was good to see some teams that I don’t see a lot of (Solanco & AC). I tried to put up a photo gallery with limited success. This is a HS junkies place to be. Coach Charlie Fisher said the event will happen next year as well. Some really good games/teams. The Lancaster Catholic/Sus TWP went into OT as Ross Conway, 6’1” jn, nailed a three-pointer from the deep corner with less than 10 seconds left.

The Crusaders took control in OT to claim the W.

Cedar Crest would run out to an early lead in the first half vs. Bishop McDevitt. McDevitt would storm back with pressure and drives to make the last few minutes stressful for the Falcons and their fans. Crest would nail some key foul shots  (6’1″ sn. Amani Jones) and snatch some loose balls late to protect the lead.

I guess everyone likes the dunk-so here is a good one by Ileri Ayo-Faleye:

Really, how can I take photos of McDevitt without a pict of Mike Gaffey? 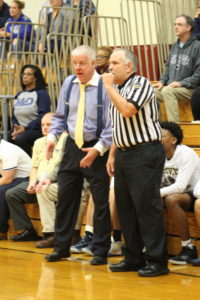 And Dell did get a cool pict during the Etown/Middletown game: #33, Gavin Gilhool, 6’3″ soph, flying high. 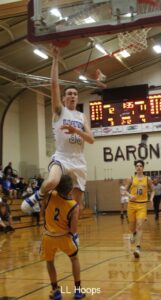 Stream me…LLhoops live-streamed the Hempfield/TWP game. I’m starting to think we need to change the name of live-stream. For example, I logged onto the youtube link at the game and saw that there were 15 folks watching it live at halftime. As of this writing time, there were over 390 views. Special thanks to TWP’s AD, Roger Czerwinski, for giving us access and giving us some props via the PA.

LL history….LLhoops is working on gathering info on the sites of the LL finals. We are getting closer to getting all the sites nailed down and will put that info in our archive page. Thanks to some of our go to historians: Coach Frank Kuhn, Frenchy Bauman, Coach Dave Althouse, Coach Bill Southward, Coach Matt Johns, Mike Gross LNP and others : )

Welcome ..Susquehanna Tackle..if you fish, you probably are well aware of Susquehanna. Tackle. In the age on online shopping, there is nothing like going to this shop and getting expert help on all types of fishing. Tell Mike and George, Jn that you saw their ad on LLhoops! 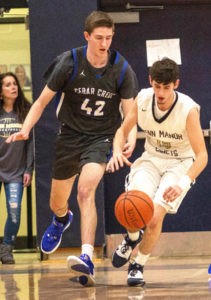 Ethan Hine, 6’ sn for Penn Manor, tossed in 45 points Saturday vs. Exeter. He netted 7 three-balls, 6 two’s and was a perfect 12/12 from the line. Ex PM Coach John Erisman was texting us as the game was in progress and asked about the last Comet that scored more than 40. That answer would be Marc Summy (All Decade 2nd team for LLhoops), who tossed in 48 vs McCaskey in a 2OT game. Forty plus in any game is fantastic. Congrats to Ethan on this accomplishment. 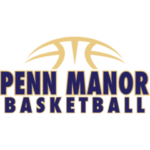 LLhoops’ AndyHerr and Bruce Badgley from the Berks beat will be doing a recap and look ahead broadcast on Small Player next weekend. The preview show was so well received that we decided to do another…and perhaps something going into the districts.

Facebook…lllhoops is trying to upgrade its presence on facebook. Stay tuned.

Re-design…Circle W is working on updating our look. We are working on some of the little things, so stay tuned. One things is for sure, the site is much cleaner. Hoping it is much easier to view on the cell phones as well.
We are deep into to league play. Next week we will look at some of the top teams in the LL and where they stand for the LL playoffs and District 3 as well.

Small school = great atmosphere…Andy reminds me and others that some of our small gyms are so much fun when the fans are there in force and rockin’. Andy was at Pequea Valley this past week and mentioned how much fun it is to do a game at PV (ex Head Coach Jim Shipper also tweeted how much the fans get ‘into it’ at the Valley). Columbia has to make the the list, and Northern Lebanon and Lancaster Mennonite and Lancaster Country Day and ELCO and …… The big school gyms are loud when packed (McCaskey), but sitting on top of the players, refs and coaches produces  a different feel. I was at Man. Central Sat., and the refs were pushing the coaches back off the floor- impossible to stand and not be on the floor.