Wrapping up the Week- Dec 16

The week that was…

What did we learn?
Section 1, as usual, will be a dog-fight. The “Big Boy Section” went 4-1 on opening night, with the only loss was TWP vs. Warwick (Warwick is used to playing the Section 1 teams as they were moved “down” this year due to realignment of the league). The guard play for the section is outstanding. We saw dominant performances from Tyler Crespo TWP, Kevin Roldan PM, Logan Horn Crest, Eli Washington Hempfield, Makai Ortiz Grey – McCaskey (more of a swing player). It’s not unusual for good guard play in Section 1, but it seems that this year is loaded with talent, which should bring some college coaches observing some games this season.

Section 2….With Warwick topping TWP, the Warriors have a leg up on the rest of the section at this point. However, the Warriors are playing Hempfield, McCaskey, and Crest this week- not an easy task. It might take some time to sort out the top teams in this section. I believe it will come down to the last few games (really stepping out on the limb here J )

Section 3
LS, MCentral and Solanco all scored first night W’s. From a distance it looks like LS could be the top team here. They are 3-1 only losing one game in OT. Manheim Central has played a lot of games and should be helped by some practice- but not so much this week as we have 3 LL games scheduled.

Section 4
ELCO and Lancaster Catholic stand all alone at 1-0. ELCO won a hard fought game at Cocalico last week. The Raiders have speed, some height, and a bunch of three-ball bombers. LCHS was 0-2 losing to very strong teams (Bangor and Wilson), but the Crusaders will be a force in the section.

Stream me..
LLhoops.com put on its first live stream game with Reading playing McCaskey. Bruce Badgley and the Alvernia crew overcame some technical difficulties in order to put on the show. The games will be archived on the LLhoops utube account.

This week the Berks Crew will be putting on 2 games.

The LL crew will be putting on one game (Crest vs Warwick Dec 21st). The LL games will feature Eric Thomas and Warren Goodling as the guys behind the mic. Long-time AAU coach Doug Kraft will also be calling some games in the future.

The games would NOT be possible without our current advertisers.

Haller Enterprises, MattressFirm, LL Coaching Association, SpookyNook Basketball, and Dan Taylor Family Law. We are looking into possibly streaming some LL playoff games if we can get enough advertising to foot the bill. So (key begging music)…if anyone can help us, please contact us webmaster@llhoops.com…J

Tweet tweet…
As always, we are grateful for the followers of llhoops sending us game info. Some big time players last week were ???????

Our followers increase each season. Check out Andy’s tweets after game night.

Thanks to our cyber editor, Gordie Jones for finding a mistake this week.

Looking ahead…3 me
Yep the week of 3 league games is upon us. All section 1-4 teams will play MWF- all crossover games. Coach Walck stated this weekend that you don’t have a chance to get some of the teams at home. Most of the Section 5 teams will as well, with a few playing Jan 4.

Andy and Dell will be out and about so should have 6 games covered this week. Dell will be at the Crest/Warwick game Friday.

Tshirts…Still selling or trying to…Click here to get online order in ($15) or catch us at a game this week for $10. The Hempfield student section helped us with some sales this weekend!

Utube…All the streaming games will be archived on the LLhoops utube account. We will also post some videos “Moses” and “AC/PM throwback” are up now.

Misc thoughts…
It was great seeing ex-head coach of Solanco, Tim Glackin, at McCaskey this past week. Tim is the varsity assistant for McCaskey.

I was impressed with Coach Ramos and the McCaskey team after their game with Lebanon – Lots of hugs on the way out of the locker room.

Had to smile as Coach Sperew of Lebanon was asking me about calls during the game at McCaskey. Sorry coach can’t help much from the media section :).

Doubling teaming with Andy at some games allows me to get some picts up on the site. Sometimes I get in a hurry to post the picts so my editing is not the best- some blurred but some players get some shots up. If anyone wants to purchase picts, contact us.

Fun stuff getting my pict taken with LCDay Lion. 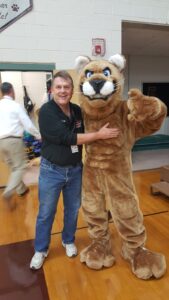