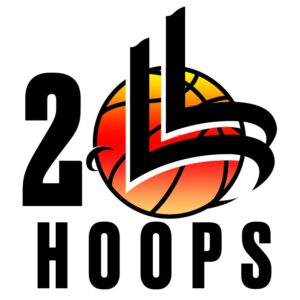 The week that was…
Both Dell and Andy were out and about this week. We started the week at Lancaster Catholic as Wilson came to town. Andy covered TWP/Exeter Tuesday. On Wed night Andy was at Eastern York vs Donegal and Dell hit Columbia at Lancaster Cath.. Thursday, Dell was at Penn Manor for CV/PM first night of the LL. This game was moved to Thursday due to a Wrestling match. Andy covered a Non-league game that featured 2 LL teams Solanco at Ephrata (LL teams play other section teams not in their cross-overs such as a Section  2 team playing a Section 3 team)……Friday, LLhoops produced a live-stream game featuring TWP at Warwick. Andy covered Columbia at AC. To round out the week, Dell hit Lower Dauphin at Hempfield to end our week of coverage for 6 nights in a row. We posted various forms of coverage from audio Soundcloud re-caps, Youtube coaches interviews, Livestream/replays on Small Player Big App/Youtube, photo galleries, and written recaps of games.

On the rise…
The Section 1 teams that have not lost yet are Crest and Penn Manor. Crest traveled to Etown Friday and came away with a close 45-41 win. The Comets connoted their winning ways with a solid win vs CV. Both teams continue this week with cross over games. Featured games for both include: Crest entertains Warwick Dec 20th and PM travels to Etown on Dec 18th. McCaskey and Hempfield are unbeaten in LL play as well. 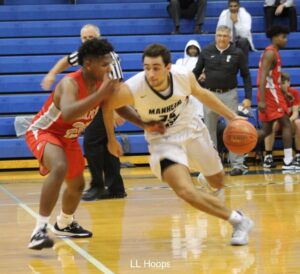 Section 2 has Warwick all alone with a 1-0 record in the LL. The Warriors are very balanced on the offensive end. Llhoops live-steam player of the game, Tate Landis, provides spark on both ends of the floor. Of course, the steady play of Joey McCracken is a given.

Section 3
Solanco and LS are both 1-0. The Mules new leader, David Long, not only earns his first W but follows it up with his first LL victory over Donegal 46-27. LS is in familiar territory – sitting on top of Section 3. The Pioneers have dominated this section the last 3 years. NL’s head coach, Chris George, stated in a tweet about LS’ point “Seth Beers with an all around phenomenal game 27pts , 7 stls, 7 assts”

Section 4
Octorara, Lanc Cath and ELCO are all 1-0. Andy Herr describes Octorara as ‘defensive chaos’- think of NCAA VCU. The Braves will host LS on Dec 18th in a key test for them. Lancaster Cath. lost in a close contest to highly regarded Wilson on Dec 9 61-48, but the game was a 4 point game late in the 4th. LC travels to Man. Central (they knocked off Warwick on their floor last week) on Dec 20th. ELCO has stood toe to toe with Lebanon Co. premier teams, Crest and Lebanon, in Lebanon’s tip. Both games were soooo close. ELCO beat Lebanon  on a buzzer beater and lost to Crest. Braden Bohannon, 5’11” jn, provides scoring from different parts of the floor, and big man, Asher Kemble, continues to impress with his shot blocking and his all around offensive game. The Raiders travel to LS on Dec. 20th for a key cross over contest. 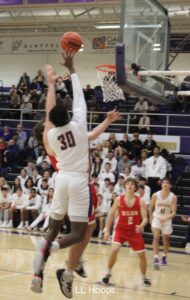 Section 5
Tied for the LL lead are PV, Lancaster Mennonite, and Columbia. PV not only breaks a long losing streak with a W over Hanover 61-57, but then followed it up with an LL win vs Lebanon Cath.: 66-49. LMHS just keeps winning. The Blazers beat previously unbeaten LCDay 75-57 in their first LL game. The Blazers are lead by Cole Fisher, 6’2” jn, pumping in 22 ppg. Columbia picked up a good road win vs a solid AC team 59-50. I saw the Tide vs. Lanc Cath and was impressed with their grittyness- is that a word? Anyway, the Tide battled the taller Crusaders using a variety of defenses and using a nice mix of drives and threes on the offensive end. LCDay visits the Tide on Dec 16th for a key Section 5 battle. 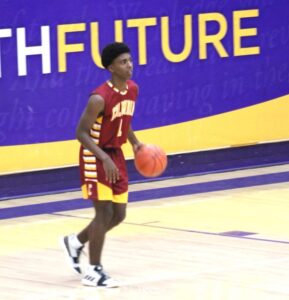 Looking ahead…
The dreaded, for the coaches at least, three game in a week is upon us. Dec 16-21 schedule is posted. All Sections 1-4 teams will have LL games on these nights. Section five will mostly play within its section but some nights they will have non-league games. However, the fans, and probably the players, enjoy a week where we can see 3 games. In some sections it will be difficult to tell how teams stack up until they play each other. I’m thinking of Sec 1 and 2 in particular. Historically, the lower sections do not do as well vs the upper sections. Warwick was huge exception last year as they beat all comers in Sec 1. This is the second year of the master schedule so teams that played ‘away’ last year will have the home crossover game this season.

LLhoops.com info…
We are averaging OVER 700 page views per day since the opening weekend. Thanks to all who follow us. The first of our scheduled live-stream games (TWP/Warwick Boy/Girl DH) had some early glitches but the broadcast was in HD on my TV at home. Small Player/Big App had the game LIVE. The replays can be found on the LLhoop web site. It’s very interesting in that we get many views after the game (players, fans, parents etc) During the first quarter, we had 20 views live on Youtube. I went home and watched the replay around midnight, and we were up to 100 plus views. As I’m writing today we are up to around 250 hits for the boys game. The girls games -our first ever girls livestream- has over 100 views as of Dec 15th. If you check out any of our advertisers, please mention LLhoops to them. We CANNOT put on these shows without sponsorship. It’s so cool to talk with the player of the game after the contest- total honesty and joy.

Earlier this week we secured the rights to live-stream the Boys and Girls LL Finals – weather dependent as always.

We hope to get out our latest all decade team (2010-2019). In a strange blip on my end, current TWP boys assistant Coach Ryan Butt somehow got left off our teams- probably because he played split decades but basically my mistake….with a click of a keyboard, we put him on:)  Greatly deserved as he was a dominant force for Hempfield during his playing days. I know there will be some players we missed -if so, contact us and make a case- in a very polite way- and we’ll evaluate. I always check with coaches and media folks who saw the players. I have seen most play but not all this decade..its always a fun/tough thing to do…but it’s always a good thing to share LL history with our followers. Here is the link to past ALL LL decade teams.

Download the Small Player big App for free and check out the games live or on replay. We will also provide you with a Youtube link for replays as well.

Tweet tweet…
@LLhoops followers now are over 2900. Thanks! Andy’s( @Andybrackets) is now over 1600. It’s been an amazing ride with the twitter handle. Fans sending us final scores really helps us keep up and helps us as followers check out our score page at a very high rate. Dell has been using the periscope at most of the game where he has wifi/connections and every now and then turns the camera the wrong way or forgets to turn it off etc.:(

Some schools now have wifi for fans (PM and Warwick come to mind). I can remember when Coach Buzz Lescoe was helping us reach the 1k mark 🙂

Sponsors…Special thanks to sponsors, so far, for the LL season. We are trying to gather more sponsors, especially for the LL finals to help cover our costs of providing a great website and live-streamed games. We appreciate greatly some funding from the teams boosters as well.

Rosters…
All up on the team pages…we will need some heights and other items on some of the pages, such as varsity vs JV players. We will try to focus in on that this week. Our rosters are current.

LL refs…
I try to say hello to the refs before the game, and ask them about taking picts if I do so. Most of the games that I’ve been to have had veteran refs. The assigner told me there is a shortage of qualified refs. I will try to get more info to post here and on the site when we get that info—how to, what to expect etc. …Looking for info from the LL refs association.

Media…As we get around the LL we run into a bunch of media folks. Just this past week, we crossed paths with LNP writers- Mike Gross, Jeff Reinhart, John Walk and stringer Steve Navaroli. The Lebanon Daily’s main man- Pat Huggins …., Blue Ridge Cable’s Chad Landers and some nice back and forth with WLBRS-Mike Givler (the only radio coverage of LL games in the area) Our area is lucky to have media that is really into the local scene.

Enjoy the 3-me week in the LL